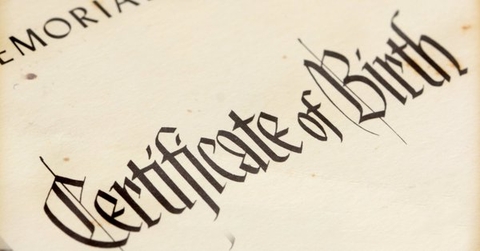 Washington state residents will soon be allowed to identify as “male,” “female” or “X” on their birth certificates.

On Thursday, the state’s Department of Health announced the groundbreaking move, which will take effect on Jan. 27.

According to the department’s website, “X” is defined as “a gender that is not exclusively male or female, including, but not limited to, intersex, agender, amalgagender, androgynous, bigender, demigender, female-to-male, genderfluid, genderqueer, male-to-female, neutrois, non-binary, pangender, third sex, transgender, transsexual, Two Spirit, and unspecified.”

The policy will allow residents to make changes to existing documents, but does not apply to newly issued ones (in other words, birth certificates for newborns). Adults wishing to change the identity listed on their birth certificate will no longer need written documentation from a doctor to do so. However, minors will require parental consent and medical documentation.

GLAAD President and CEO Sarah Kate Ellis was among those to praise the state’s move. Ellis pointed to a 2017 survey finding that 20 percent of millennials (defined as people between the ages of 18 and 34) identified themselves as LGBT+. Meanwhile, the poll also found that younger people were more likely to identify outside of traditional gender binaries than people from older generations.

Given those statistics and America’s current political climate, Ellis said, “It is vital that states catch up and acknowledge the reality of the non-binary community.”

“With LGBT+ people and especially trans and non-binary Americans under attack daily by the Trump Administration, as evidenced by [President Donald] Trump’s efforts to block trans Americans from serving in the military and rescinding of Title IX protections for trans students, designation ‘X’ is a powerful and reaffirming sign that our identities cannot and will not be erased,” Ellis told CNN.

Washington will follow Oregon, which became the first state to offer a non-binary option on birth certificates on Jan. 1. California will follow suit in September when its law, Senate Bill 179, takes effect. That bill passed in October.