The history of the word “gay” 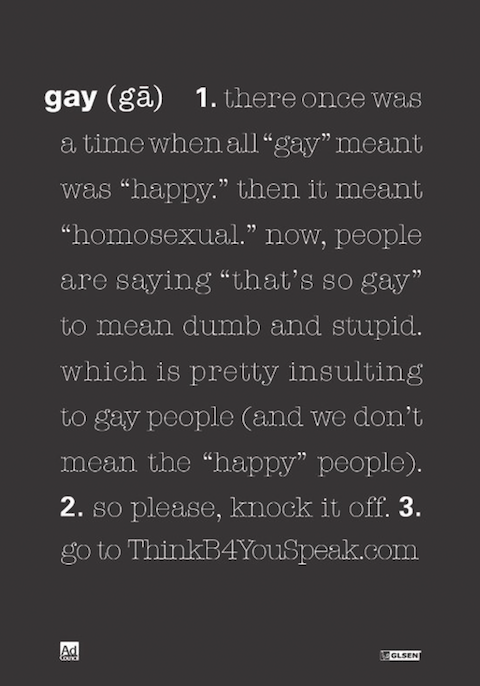 Do you know what the word gay really means?

The word gay dates back to the 12th century and comes from the Old French “gai,” meaning “full of joy or mirth.” It may also relate to the Old High German “gahi,” meaning impulsive.

For centuries, gay was used commonly in speech and literature to mean happy, carefree, bright and showy, and did not take on any sexual meaning until the 1600s.

At that time the meaning of gay as carefree evolved to imply that a person was unrestrained by morals and prone to decadence and promiscuity. A prostitute might have been described as a “gay woman” and a womanizer as a “gay man.”

“Gay house” was commonly used to refer to a brothel and, later, “gaiety” was used as a common name for certain places of entertainment.

In the 1890s, the term “gey cat” (a Scottish variant of gay) was used to describe a vagrant who offered sexual services to women or a young traveler who was new to the road and in the company of an older man.

This latter use suggests that the younger man was in a sexually submissive role and may be among the first times that gay was used implying a homosexual relationship.

In 1951, gay appeared in the Oxford English Dictionary for the first time as slang for homosexual, but was most likely used in this way “underground” at least 30 years earlier.

For example, in the 1938 film, Bringing Up Baby, Cary Grant dons a feathery robe when his clothes are sent to the cleaners and says, “...I just went gay.” This line (ad-libbed by Grant) can be interpreted to mean that he was behaving in a happy-go-lucky or lighthearted way but is accepted by many as the first use of gay to mean homosexual in a mainstream movie.

Today, gay is a socially acceptable term for homosexual people. However, this word is rooted in the classification of certain types of people as illicit, counterculture or behaving in ways that go against the respectable conventions of society.

When gay is used today to mean stupid or undesirable (it has only been used in this way since the 1990s), it carries with it a history of negative judgment and rigid ideas about who or what is acceptable.

In response to the lack of representation of LGBT people in school curricula and disproportionate incidents of bullying and violence against LGBT youth, the Anti-Defamation League, GLSEN and StoryCorps collaborated to create Unheard Voices, an oral history and curriculum project that will help educators to integrate LGBT history, people and issues into their instructional programs.

As part of the curriculum, Unheard Voices features a section on the word “gay,” its history and how to use the word properly.

The word has a long history of misuse and has developed somewhat of a negative connotation in today’s society. Gay is not a dirty word. Gay is not a bad word. However, gay is not an insult either. If you want to say something is stupid, lame, dumb or any other variation of those terms, use those terms.

Unheard Voices released a series of statements made by students around the United States on the phrase “that’s gay.” Chris R. of Ohio said, “When I hear ‘that’s so gay,’ I think...that’s so ignorant!”