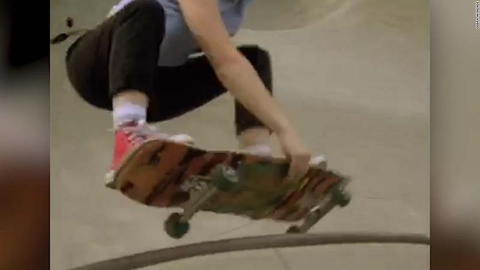 (CNN) -- Hannah Chumley felt a hand reach out and yank on her clothes -- her bra strap, specifically.

It belonged to another skater who was falling from his board, and in doing so, trying to pull Chumley down onto the concrete with him.

The 19-year-old managed to escape his grip, but felt shaken by the encounter. It was one in a series of aggressions she says she feels on a regular basis at the skate park, where she's been practicing tricks since she was seven years old.

"Almost every time I go to the skate park, people are so shocked to see a girl that skates," she told CNN.

And when male skaters find out she identifies as queer-- she turns down their advances with the simple "I have a girlfriend" -- their responses tend to become mean, sometimes even violent.

Chumley didn't want their attitudes to stop her from doing what she loves most, but at the end of the day, she was beginning to feel unsafe at her local skate park.

The college student realized that if she wanted to find an inclusive environment for LGBTQ+ skaters in her city, she needed to make it happen herself.

So, in January, Chumley put up a flyer for Atlanta's first Queer Skate Day and hoped her idea would resonate with other people. Before long, dozens of queer skaters of all levels started gathering on a weekly basis.

Their community has grown quickly in the past six months. The Atlanta group is only one example of how LBGTQ+ skaters are rising up across the United States to break down barriers in skateboarding and build safe havens that celebrate them for who they are.

They create their own safe spaces

"Historically, skateboarding has always been dominated by straight white men," said Chumley. "It's so behind the times, and it needs to change."

She refers to high-profile skaters like Jay Adams, who was convicted of felony assault in 1982 in the fatal beating of a gay man, and Jason Jessee, who apologized in May after old interviews in which he made homophobic slurs resurfaced online.

Sophia Mackey, who has been attending Queer Skate since March, says it's made a big difference for her to have a place dedicated to the intersection of queerness and skating.

Mackey believes that both "queer culture and skate culture offer a space for free-spirited people with alternative interests."

Events like Queer Skate Day, she says, are essential in making sure LGBTQ skaters "feel safe and have a good experience that's ours."

Beyond skating itself, the meetup is also a way for LGBTQ people in Atlanta to bond and rally around one another.

"Before we had queer skate, I would go to the skate park and feel so frozen and intimidated," said Camila Izaguirre, Chumley's girlfriend and co-founder of the group. "But being there with other queer skaters makes me feel so encouraged and motivated."

Their mutual support makes it easier to learn to skate

LP White learned to skateboard as a preteen but lost interest over the years, partially because it was difficult to connect with other skaters. The 24-year-old from Portland, who prefers the pronouns they/them, decided to pick their board back up a little over a year ago. This time, they promised, they weren't going to put it down again.

To be able to keep their word, White needed to find other like-minded people to skate with.

They searched repeatedly on Facebook until coming across a group that hosts Queer Skate Night once a month at Commonwealth Skateboarding, a shop with an indoor park in Portland.

"I think for me, the importance of it is that I wouldn't have kept skateboarding if it wasn't for that," White told CNN. "And I think it's the same for so many people, so many friends from (the group) who are also queer and want to get better at skating."

What started as three or four people showing up to skate together last year has grown into 10 and sometimes upward of 20 at every meetup.

White says the skill level ranges from experienced skaters who are sponsored by companies to beginners who attended once, fell in love with the environment and kept coming back.

Being around other LGBTQ people takes the competitive edge off learning, says White. Everyone is there to lift each other up and cheer on each other's accomplishments, whether it's unlocking a complicated new trick or being able to ride 20 feet without falling off.

"A big part of it for me and others I've talked to is that I think when there's queer meetups or you're skating with other queer people, it doesn't feel like there's anything to prove," White told CNN. "It feels like you're just having fun and with your friends."

And by establishing a place where people will feel accepted and embraced for who they are, the PDX Queer Skate Crew is opening the doors to a sport that saw its first professional skater come out as gay less than two years ago.

"I just think what's really important is this community-building aspect of it," White said. "I think it's important to grant access to activities to people who feel like they may not have it otherwise."

They mix skating with LGBTQ art and culture

In California, Miriam Klein Stahl, 48, and Tara Jepsen, 45, focus on the visual side of the queer and skate communities.

Stahl lives in Berkeley and Jepsen lives in Los Angeles, but the two were brought together by their desire to heighten visibility for LGBTQ imagery within skateboarding.

They partnered up last year to design skateboard decks -- the visuals featured on the boards themselves -- and apparel that highlights queer icons like poet Justin Chin and activist Audre Lorde.

Their company, Pave the Way, is a "sister company" with Unity, a Bay-Area skate and art collective that holds LQBTQ meetups in cities around the world.

The two groups sometimes host events together, at which Stahl and Jepsen like to distribute their designs for free.

"For us, we're not doing this to make money," Stahl told CNN. "We're doing because we love skateboarding and we're proud of our queer culture and want to promote both at the same time."

For Pave the Way, artwork with positive depictions of LGBTQ people is an essential way of increasing acceptance and fostering safe spaces for a variety of gender and sexual identities in skateboarding.

And the company's mission has been widely embraced by everyone, says Stahl. When skaters who may not identify as LGBTQ use Pave the Way's boards, it helps to reinforce an open and welcoming environment for everyone.

The two women also take pride in showing that anyone can skate at any age; Jepsen started when she was 36.

As they ride into their 40s, they say both their friendship and their skating has blossomed thanks to Pave the Way.

But knowing that skateboarding can be an isolated sport, and knowing it hasn't always been friendly to LGBTQ people in the past, Stahl and Jepsen hope to show newcomers that it's cool to take pride in being both queer and a skater.

"A lot of it is for the younger generations to feel like they don't have to go at it alone, that there's going to be community around them," Jepsen said.

And it seems to be working.

Stahl teaches visual arts at a high school in Berkeley. She says many of her students love the gear and "want to ride our boards."

The Smithsonian American History Museum is also acquiring a Pave the Way deck for its permanent collection.

Mo Hayden of Grand Rapids, Michigan, picked up her first board in August 2017.

"I saw Unity's videos and I was like, 'that looks so cool," she said.

The 23-year-old student got hooked immediately and began making art related to skating during the time she wasn't practicing.

As she entered the scene, however, Hayden also wanted other women and LGBTQ people to feel comfortable showing up to parks and skating with everyone there.

For her senior Visual Studies show at Grand Valley State University, she held two skate days to bring skaters in the community together.

Two people came to skate, which she says she expected from hosting it an art gallery, but slowly, she is encouraging other skaters in Grand Rapids to let their guard down and be kind to one another.

"I'm really open about being a beginner and being femme-presenting and queer," she said. "That's like an admission of vulnerability, and maybe we can all meet there."

Hayden and her friends hold meetups where they all help each other with tricks. She says straight skaters often welcome them and join in on the meetups.

The recent graduate stresses the importance of finding common ground instead of forming an us-versus-them narrative around mainstream skating and queer skating.

"It's not a separate culture," she said. "We all have to share this culture."