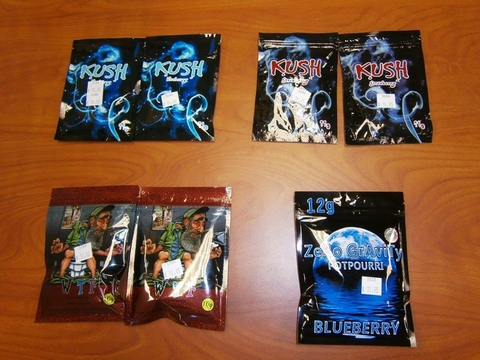 K2 or 'synthetic marijuana' is not what it seems. Photo provided by DEA.

A drug called K2 is believed to be behind more than 100 overdoses in New Haven, Connecticut, this week.

Some of those who overdosed experienced speeding heart rates, difficulty breathing and vomiting. Others were found collapsed in a semiconscious or unconscious state on the New Haven Green, the downtown park.

Earlier this year, K2 was also tied to 56 cases of severe bleeding, including four deaths, across Chicago and central Illinois. In a separate incident, 33 people collapsed on the streets of New York City.

A July report from the US Centers for Disease Control and Prevention indicated that the number of K2 poisonings rose sharply over the past year.

So what is this drug that is causing all this mayhem?

"The nomenclature 'synthetic marijuana' is really incorrect. These things are not synthetic marijuana, and I worry using this term might give the wrong impression, especially to young people," said Mike Baumann, chief of the Designer Drug Research Unit at the National Institute on Drug Abuse.

K2 or "spice" is a mixture of herbs, spices or shredded plant material that has been sprayed with chemicals that are similar to but not the same as THC, the psychoactive ingredient in marijuana. Sometimes, K2 comes in liquid form to be vaporized in e-cigarettes. It is also smoked in joints or pipes or made into a tea.

"So these chemicals, which are more correctly termed 'synthetic cannabinoids,' they're designed to stimulate cannabinoid receptors in the brain," Baumann explained. THC, the active ingredient in marijuana, also stimulates these receptors, but K2 is much more potent than THC.

By "much more potent," Baumann means "50 to 100 times more potent," and this greater power is more likely to cause serious side effects.

"Like vomiting, hypertension, hallucinations, psychosis, seizure, coma and, in some cases, death," Baumann said. "These synthetic cannabinoids are not marijuana. It's a different animal altogether."

"Most of the substances are made in Asian laboratories and trafficked over the Internet and shipped by mail," Baumann said. "Dealers get these substances, and then they put them in solvents, they dissolve them, and then they spray them onto plant material."

In previous years, K2 was sold in shiny packages and found on the shelves of brick and mortar shops -- mostly gas stations and head shops -- but there's been a crackdown on that, Baumann said.

"What's happening now is, it's more trafficking over the internet, where the dealers and cartels can purchase the substances via the internet and then sell them through the more traditional street dealer type of scenarios," he said.

This international trade aspect means it's extremely difficult to track the import of these substances. In the United States, this tough job falls to the Drug Enforcement Administration, which has classified -- in some cases temporarily -- eight separate synthetic cannabinoid chemicals as Schedule I, meaning they have no currently accepted medical use and a high potential for abuse.

Yet it does not stop when the DEA identifies one of these synthetic cannabinoid chemicals and it is made illegal by legislative action. "One of the things that happens in response to that is, you get a bunch more new chemical entities come out to replace those that have been made illegal," Baumann said.

The World Health Organization is also tracking these compounds because the problem has "global reach," he noted.

Use of these drugs is "under the radar," so it's difficult to estimate the total number of users, Baumann said.

One group of people who use these drugs more than the general population is "people who are subjected to random drug testing, because the substances are not detected by traditional urine tox screens," he said. These include probationers, parolees, military personnel and athletes.

"There appears to be an uptick in use of these synthetic cannabinoid products among the homeless and indigent populations," Baumann said, adding that this is an "easy and inexpensive means of getting high," as K2 is "quite cheap in comparison to other drugs."

"Chronic users report the development of tolerance and dependence, two cardinal features of addiction," he said: Tolerance means the drug becomes decreasingly effective over time, while dependence refers to the insatiable need for the substance.

"Tolerance and dependence can lead to dose escalation and compulsive use, so yes, the drugs are addictive," Baumann said. Parents looking to see whether their children might be using the drug should look for red eyes , depressed mood and changes in behavior or sleep patterns. In the worst-case scenario, users become impaired, fall into a stupor or lose consciousness.

"More alarmingly," he said, K2 and spice products have been laced with rat poison and opioids.

"These mini epidemics are related to new substances people know nothing about," Baumann said, adding that these "periodic, mini-epidemics of drug overdoses" in which many people face serious health consequences as a result of using synthetic cannabinoids continue across the nation.

"It's the tip of the iceberg," he said. "These products should be avoided at all costs."