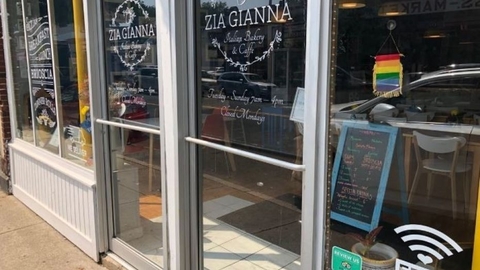 The rainbow flag at the front of Caffe Zia Gianna. Photo by Boston 25.

Customers and community members rallied together for a popular restaurant in Massachusetts which received a one-star review on Yelp for the rainbow flag hanging in its storefront.

According to Fox News, Nino Barbalace is the owner of Caffe Zia Gianna in Dorchester who said he wants his business to feel inclusive for all.

However, he noticed a recent review on Yelp which gave him a one-star rating and ranted about the LGBT flag he has hanging in the restaurant.

The article reports the person who wrote the review said he didn’t appreciate the customer base Barbalace supports.

“After seeing the rainbow flag in the window, I’ve had it with this place and have thrown in the towel…Well, that flag says all and when you delve deeper to see the real customer base here, it’s clearly geared and catered ONLY to those who rally behind the rainbow flag.”

“It was personal,” Barbalace told Boston 25. “If you go to a place and you’re not happy with the food or the service, I understand that if I made a mistake because we all make mistakes. This is a restaurant, not politics.”

According to Yelp's content rules, reviews "aren't the place for rants about a business' employment practices, political ideologies, extraordinary circumstances, or other matters that don't address the core of the consumer experience."

After taking a screen shot of the review Barbalace posted it to Facebook and declared, “all are welcome at Zia Gianna, even this gentleman.”

He received quite a bit of positive support from his other customers.

“We thought we were beyond that at this point,” Tiffany Andrade, a customer, told the Boson Fox affiliate.

On Friday Andrade went to the restaurant to show her support.

“Luckily we live in the land of the free and people are entitled to their own opinion, but I do think it’s something to understand that we are an open community and there are people who come from all different countries and all different backgrounds and we should be welcoming of everyone,” said Andrade.

Despite the review and drama that came of it, Barbalace kept the flag up and told Boston Fox affiliated the writer of the review is welcome to return.

“I’m here to serve the food. If he is hungry, he is welcome to come here,” Barbalace said.