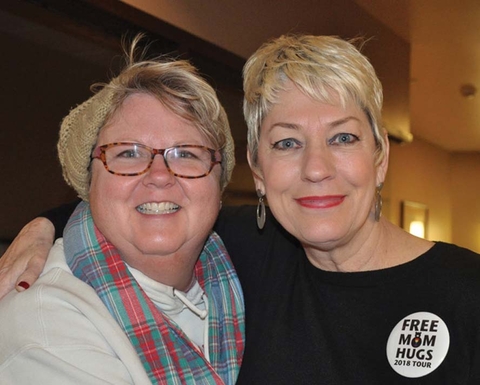 Katrina Kalb & Sara Cuningham of FMH’s will travel to San Francisco for the third FMH tour. Photo by Robin Dorner.

Free Mom Hugs (FMH) is going on their third tour, and they have chosen San Francisco.

On this tour, the FMH team will share the story of a conversion therapy survivor, talk to parents about how to be affirming to their LGBTQ+ children, listen to stories from around the nation, and celebrate the legacy of Harvey Milk.

“That day I went home covered from head to toe with glitter,” Cunningham said. “I also went home broken from stories I heard from the LGBTQ+ community.”

Cunningham said the mission of FMH is to encourage, educate, and empower the LGBTQ+ community and their families.

“I like to think of what we do as going ‘beyond the hug,’ and that brings me great joy,” she said.

The upcoming tour will be a two week, 10-city stop, May 3-18 from OKC to San Francisco and back to OKC.

The history of gay activist Harvey Milk inspired the FMH team’s decision to travel to San Francisco. Cunningham said she’s always been encouraged by his passion and courage, and she figured this was the best place to be to celebrate that passion.

“This is where change happens,” she said.

Cunningham said she’ll be driving around the nation in her Jeep with her traveling companion Katrina Kalb, a survivor of conversion therapy. They will be sharing their stories and providing resources, as well as giving out hugs and high fives.

“It’s amazing to me, as a member of the LGBTQ+ community, to see the outpouring of love and advocacy all over the country on our behalf,” Kalb said. “Conversion therapy has finally come to the forefront of people’s minds as a deadly practice that needs to be ended.”

Kalb said she’s excited to see the passion all over the country to make conversion therapy illegal, and she’s looking forward to having conversations about her experience.

“I realized recently that when I say I am a conversion therapy survivor, it means it was something to survive,” she said. “It’s dangerous and deadly, and not everyone does survive. But I can bring hope that you can. Amazing, supportive people can surround you. They are out there. I found them in my FMH family. And now we are spreading the movement, and people are rising up bringing hope and healing to others as well.”

Kalb said she’s also interested in hearing other people’s stories while on tour and being able to learn from the people they meet.

“I am constantly moved by our similarities and differences and how they bond us together if we let them,” Kalb said. “This is where the healing is, and I am consistently being healed, piece by piece, by the stories I hear.”

She said she feels fortunate to experience healing and hope on tour.

“There is so much power and healing when we acknowledge when other people have been hurt or abused,” she said. “Just hearing someone say, ‘I’m sorry that happened to you’ or ‘that was wrong’ can lift years of shame off our backs.”

About the San Francisco tour, Kalb said she’s grateful to sit in the passenger seat next to Cunningham, and she’s excited to see what FMH will do. 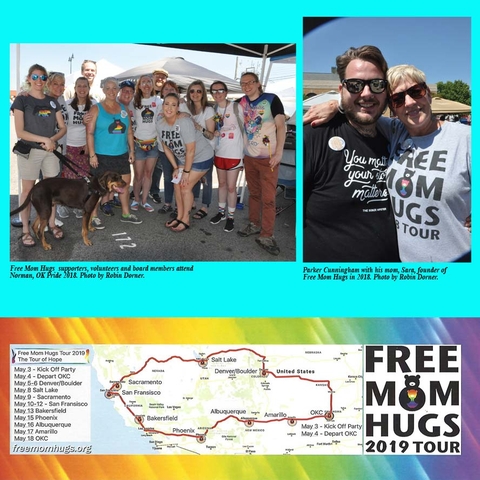 “It really is changing the world,” she said.

Cunningham said the relationships she’s made on past tours have been profound and ongoing. She shared a story from the second FMH tour. They arranged a time for people to share their own stories after a presentation in Colorado. That’s when they met Sonny and his family.

“Sonny, a beautifully well spoken, fourth-grade, transgender boy, was the first to raise his hand high and say, ‘I have some really good stories and a few sad ones,’” Cunningham said.

Sonny shared he was excited to meet friends like him, and he talked about how lucky he is to have such supportive parents, but Sonny was sad because his best friend couldn’t be his best friend anymore due to Sonny’s gender identity and expression. This experience was a big moment for Cunningham.

She also said FMH provides a safe space for parents to understand they are not alone when they’re child comes out as LGBTQ+.

Cunningham knows this feeling well, as her son Parker came out as gay to her, and she didn’t know how to respond. Trapped between her love for her son and her religious values, she lashed out and told her son to try not to be gay.

In an earlier interview with The Gayly, Cunningham said she would have changed everything. She even once considered sending her son to conversion therapy. Then, she found a way to show other parents they’re not alone, and, in 2014, she wrote a book titled How We Sleep At Night: A Mother’s Memoir.

Now she’s traveling around the country, talking to parents, teachers, pastors, and community leaders about how to create a safe space for the LGBTQ+ community.