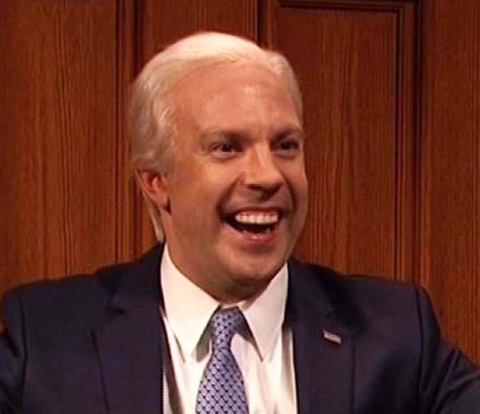 Sudeikis' Biden returned to the NBC variety show to kick off Saturday night's episode by taking sensitivity training, even though he thought he was there to talk about his March Madness bracket.

"I know I had Delaware winning the whole thing, even though they didn't make the tournament this year, but hey it's better than last year when I picked Amtrak, right?" he said.

Kenan Thompson's adviser character informed the fake Biden that it was about the "touchy, feely stuff." The sketch follows allegations that the real-life Biden made women feel uncomfortable with the way he touched them.

"I'm a hugger, I'm a kisser and a little bit of a sniffer," Sudeikis' Biden said. "But the last thing I want to do is offend anyone."

A consultant who handles sensitivity training, played by Kate McKinnon, then came in to help fix Biden's behavior.

"Great to meet you," Sudeikis' Biden said up close and nose-to-nose with the female consultant.

"Yeah, so this is exactly the kind of thing I'm here to prevent," McKinnon's consultant told the fake Biden. Sudeikis' Biden then played soul singer Lou Rawls to help bring in some "vibes" and build a "human connection."

Sudeikis' Biden asked if a hand shake was all right but also asked, "What about if during that handshake I tickle her palm a little bit?"

Sudeikis' Biden then asked if it was OK if he could still do that "gorgeous lift that they do at the end of 'Dirty Dancing.'"

"Who would you do that with?" McKinnon's consultant asked.

"Hell, whoever is strong enough to pick me up," he responded.

The sensitivity training ended with Sudeikis' Biden saying he really didn't learn anything but felt that it was important to listen.

"Let's hug it out, America," he said before saying the show's classic catch phrase, "Live... From New York! It's Saturday night!"