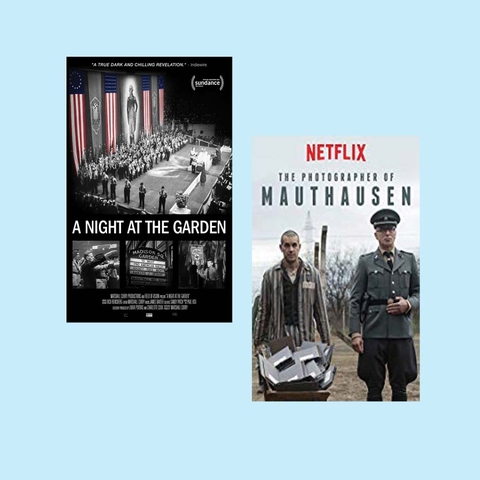 A Night At The Garden: A film just seven minutes long with so much impact is rare. The recent Academy Awards had many incredible nominations in the Documentary Short category which too often get overlooked later.

I just finished reading a remarkable book by Arnie Bernstein entitled Swastika Nation about the rise and fall of the pro-Nazi German-American Bund. This group had huge membership rallies and Youth Movement summer camps (including hikes ending with stiff raised arm salutes and Seig Heils) in the United States in the 1930s.

This anti-Semitic political organization was led by demagogue Fritz Kuhn. He is also in this narration-less short doc of the Bund George Washington’s Birthday rally in New York’s Madison Square Garden in 1939.

Watching about 20,000 Americans attending and giving that salute gives an effective chill to the bone that a book can’t deliver. Marshall Curry compiled this archival footage of this America First rally in such a way you’ll have no problem connecting it to today and certain “propaganda rallies” you see on the news nearly every month or even weekly.

The big difference in then and now is we should know (or know better) where this sort of crazy nationalism led and the dangerous villainy it supports. What an important chapter of American History too often not taught or shown.

To see this short doc, Google it. It is well worth your seven minutes.

The Photographer of Mauthausen: Following the Spanish Civil War in 1943 and with WWII in full swing, the winning fascist General Franco sent many of his enemies as free workforces into Nazi hands in grim concentration camps like Mauthausen.

One young communist prisoner named Fransesc Boix survives by being a photographer’s assistant. He helps the warden document the camp and keeps files on those dying in failed escape attempts, even though he realizes he is helping their propaganda machine.

Once he and other prisoners learn that the Third Reich is falling after Stalingrad, they begin an organized and risky campaign to preserve negatives of the atrocities for evidence. They rush to capture these negatives even as the Nazis ruthlessly begin to destroy all photos and documents and dispose of the prisoners.

Female director Mar Targarona handles this true story with a sensitive eye and metered pacing between suspense and evil horror.

The Photographer of Mauthausen is available on Netflix.