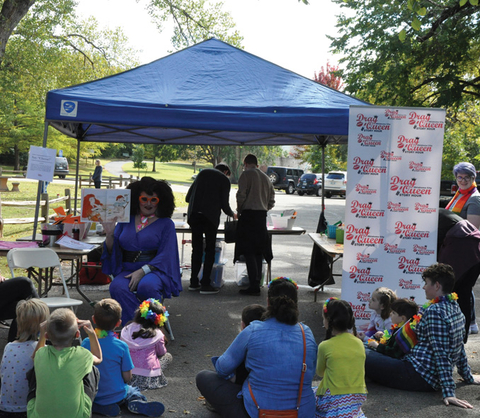 At the 2018 inaugural Edmond Pride, a special edition of Drag Queen Story Hour was hosted by Ms. Shantell. Photo by Robin Dorner.

This year’s Edmond Pride will be one to remember. The main celebration will be from 11 a.m. to 5 p.m. October 12 at Hafer Park. The theme for Edmond Pride will be released soon.
John Stephens, UCO’s director of undergraduate admissions and president of the UCO LGBTQIA+ Faculty and Staff Association, said there would be live musical performances, drag shows and food trucks at the event.

Stephens said Pride will be family-friendly and will focus on education of LGBTQ+ history and terminology, especially during the promotion of the festival.
“This year we are expanding on what we did last year and introducing educational videos that explore terminology and experiences from members of the LGBTQ community as well as allies,” he said.

This Pride event is the second year for Edmond to host a Pride celebration. Stephens said he was excited about the turnout and the support from last year’s festival. They hosted over 70 vendors and even included an appearance from Ru Paul’s Drag Race All-Stars winner Trinity Taylor. Stephens said they had over one thousand people in attendance.

“I heard from countless community members that were so excited to see a Pride festival in the town in which they live,” he said. “This also provides a connection to the city they are from or where they currently live. Being tied to one’s community brings another sense of pride and acceptance.”

Stephens said the event will be even bigger this year, and he’s excited about the high volume of interest. There are 15 members on the board, and the team is still receiving submissions from artists who are interested in performing at Pride. Stephens said performers could email edmondokpride@gmail.com for submissions.

He also said planning a Pride event takes a lot of time, thought, and dedication, and he’s excited for what’s to come for the Edmond community.
“I heard from individuals who have lived in Edmond for decades say that they never thought they would see the day where Edmond has a Pride,” he said. “I also heard from the younger generation and their parents about how excited they were and what it meant to them to see a celebration of acceptance and recognition.”

Edmond Pride is hosting upcoming fundraisers that are welcome to the public. Pride Ride will be at 1:45 p.m. June 15 at Cycle Bar on Classen Curve and Energy FC will host Pride Night on June 15.