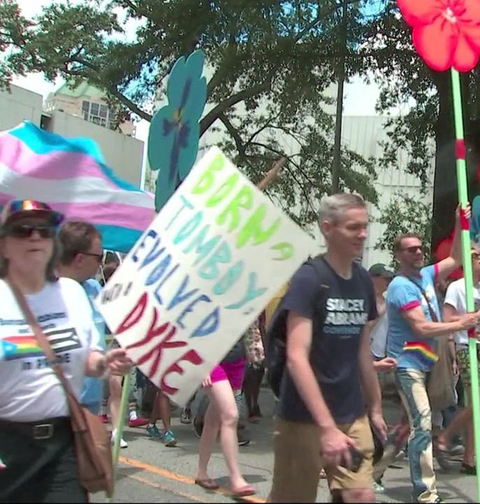 Thousands of people in Atlanta and around the world took to the streets Sunday for the largest LGBTQ+ celebration in the world - the 50th anniversary of the Stonewall Riots.

The Stonewall riots were a series of spontaneous, violent demonstrations against police by members of the gay community. Don Merriwhether took part at the tender age of 15. He says, “it was my first experience in it and it kept me involved for the rest of my life and when I moved to New York in the 70s I became an advocate, particularly with the AIDS crisis.”

The Stonewall demonstration started in Manhattan in 1969 after queer people across the country fought back from being sacrificed daily and often marked as criminals by police. 50 years later the LGBTQ+ community is still honoring the Stonewall legacy all over the nation.

In the streets of Atlanta, it was no different. Hundreds of people filled the streets of Midtown with colorful clothing displays and signs, demonstrating raw self-expression and sparking memories. One Atlanta drag queen, Sister Sissy Sweet Tea, says that’s exactly the reason she moved from Rural Virginia and has called Atlanta home since 1992.

“I went with a friend to go see Pride in a park, and just seeing the crowd in the love and acceptance of everyone was exciting." she says, "and I just knew I needed to be in Atlanta… A city that was welcoming.” For the entire LGBTQ+ community, the Stonewall anniversary is more than just honoring the legacy, it’s a resistance that reversed a long history of social injustices and police brutality towards the gay communities.

Atlanta's 49th Pride Celebration will be October 12-13. Atlanta Pride is held in October and coincides with National Coming Out Day. It was moved from June in 2008 because drought forced the city to cancel all large events in Piedmont Park. Learn more about Atlanta's Pride, the parade and the events leading up to it, as well as how you can volunteer, at atlantapride.org.