Why we love "Queer Eye" 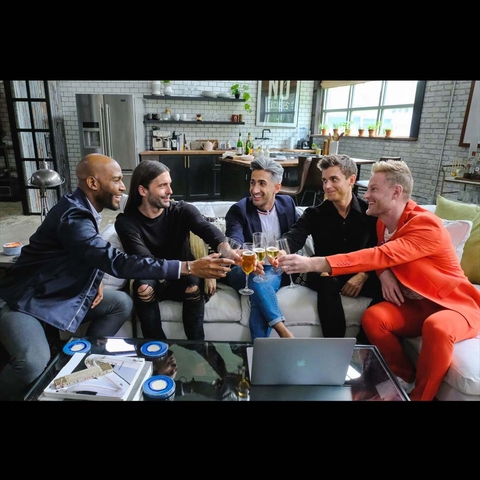 In case you haven't seen it, there's a moving episode in the third season of Netflix's "Queer Eye" in which viewers meet Rob Elrod, a 42-year-old single father, whose wife, Allison, had died two years earlier from breast cancer.

He was struggling to raise his two young sons while grieving the family's loss, and it had become overwhelming.

Enter the "Fab Five," the name producers came up with for the five experts on "Queer Eye" -- Jonathan Van Ness (grooming expert), Antoni Porowski (food and wine), Bobby Berk (interior design), Karamo Brown (culture) and Tan France (fashion.) The boys are tasked with helping a subject -- or in "Queer Eye" lingo, a "hero" for their ability to be so vulnerable -- and get back on their feet after a setback.

In Elrod's case, the Fab Five managed to help him move on with the memory of Allison still with him.

It's impossible to watch the episode without crying. Even the cast and crew shed tears, as they usually do while working, says the show's casting director Danielle Gervais.

"We cry constantly," she tells CNN. "Literally, to this day I cannot watch Rob's casting tape without crying. Forget the episode. His casting interview had me crying. I literally cannot watch it, it's embarrassing."

While Netflix doesn't release official viewership numbers, the Emmy-nominated show has clearly resonated with audiences and earned critical acclaim since it debuted as a reboot of the 2003 Bravo makeover series "Queer Eye For the Straight Guy" last year.

With Season 4 of "Queer Eye" debuting Friday, CNN spoke to the production team behind the series to learn how every "Yass" moment comes together.

Let's do a reboot

Around late 2016, "Queer Eye for the Straight Guy," creator David Collins and his company, Scout Productions simply decided it was time to remake his original series.

"The creator of the show, David Collins, you know, this was his vision. And so this all came to me really around the time when the two, they said it was ready to be cast. David obviously felt that the time was right," Emmy-winning casting director Danielle Gervais tells CNN. "And you know, Netflix I think smartly had the vision and the foresight to take a chance on it because the idea, I think, of rebooting a show like this, a show that was so successful and so iconic when it first came out, I think, you know, it was risky."

Jennifer Lane, "Queer Eye" showrunner, says a reboot was a great idea, but that the show had to get with the times.

"It is hard to recreate a series that was so popular and expect to match that kind of fervor," she says. "I just knew that we needed to craft a series that was for today. We could use what worked for it the first time around, which is an awesome 'make-better series' in itself. There's something there for the whole family kind of thing and then highly craft it for today's audiences, which kind insist on more connection, more authenticity."

Production decided to change a few things right away. With LGBTQ rights in the spotlight, the show would leave New York and film in cities across America, and they incorporated interviews with the Fab Five in each episode, so viewers could hear their thoughts and feelings as they connected with the heroes.

"I think that was probably the biggest, concrete change from the outset," Lane says.

Gervais was tasked with finding a fresh team of experts, and says the pressure to get it right was overwhelming. Starting with nearly 300 men in the various professions, they narrowed it down to 60 guys then held a "chemistry test" in Los Angeles to see who best worked together.

"The pressure, I'll say this, you know, I remember obviously the original Fab Five and they were incredible and they still are," Gervais says. "The idea of even trying to fill those shoes, I think, felt like a tremendous undertaking. And again, a very risky one. And so we had to get it right. There was no choice."

"They have to know what they're talking about within their vertical. These guys, obviously they know what they're doing, but they do have to have the people skills too. I think first and foremost, we always looked for an ability to tap into their personal and professional experience as a gay man doing what they do. They have to level with the heroes and talk to them in a way that's meaningful and can really help somebody."

Sixty men that stood out were brought to a hotel in Glendale, where for three days, they sat in front of producers and Netflix executives and were directed to be themselves.

"I remember it like it was yesterday. We were all sitting in a room, and we did things like fishbowl questions with them. Fishbowl questions is like speed dating. We'd all talk. And then we started to watch them," Gervais says.

The team gradually began to see the right blend of experts emerge.

"Everybody has their turn to come in and we sort of started to see this sort of bond form a little bit with Karamo and Bobby," Gervais recalls. "And then Tan kind of fell into the mix and then all of a sudden, we brought in Jonathan and then it felt like, wow, and then Antoni came in and all of a sudden it was the five of them. It was like putting together a magic puzzle."

In the beginning, production would look to secure locations for the show but didn't yet have permission from Netflix to say exactly what the show was, so it was difficult to convince people to give them a shot.

"It's 100 percent much easier now for us to secure locations than it might have been in Season 1 in Atlanta," laughs Lane.

Production has staffers who study the cities they choose, with the aim of highlighting the fabric of a particular community and the people who live there.

For Lane, it's especially hard -- yet rewarding, she says -- because she's away from home most of the year filming the show.

"Once we land in a city, we do a deep dive," Lane says. "We maybe have 20 potential people [to feature on the show] and we'll meet with these people and find our best candidates from that, but also in the street, anywhere." She adds, the important questions when casting are, "Who's ready for change, who's vulnerable, whose stories haven't been told before?"

Executive producer Jordana Hochman, who was brought in on the ITV end, says choosing the heroes is a very "personal experience." She's found that their heroes share a sense of hopefulness that has made the show a family-friendly experience.

"I know a lot of families where parents and tweens and younger kids are watching the show together," she says. "My daughter's 13, she's obsessed with the show, and so are all her friends. It's something that we can watch together."

For Season 4, Gervais teases that we will meet a new hero this season who will likely bring viewers to tears, John Stoner. The divorced dad is a sports superfan known in Kansas City as the "Cat Suit Guy" for the onesies he wears to local games. His 10-year-old daughter has had enough.

"I had several people write in about him specifically, which is weird, you know, like people all knew him and all felt like this guy is right for a makeover, which I thought was kind of funny," Gervais says. "But it's not that easy. There's a massive checklist the heroes have to meet, and all these requirements that these people have to have in order to really make for a wonderful hero."

"One of the first things is we typically are looking for people that don't see this coming," Gervais says. "So people that write in about themselves, often it's not the right fit. It's typically people that are nominated. Those tend to be the heroes that we go for. And the biggest thing for us with heroes is we constantly will ask the question of why now? Why does this person need this now? Why are they ready for this? What is happening in their lives right now that makes this the perfect opportunity for them? Sometimes the answer is really obvious, and then other times it's someone that we absolutely love. We love something about them."

The love is real and so are the tears.

"It's funny. We never aimed for it," Hochman says of the tear-jerking reputation of the show. "We just leaned into it instead of leaning away from it. And I think, you know, I think with other productions, or with other networks, maybe there would have been more of a resistance in terms of having such an openly, overtly emotional show. But we all collectively wanted to go there. That's what the show wants to be. And we allowed it to go down that road."

Gervais sums it up, saying, "We all cry constantly."

How are past heroes doing?

"On the staff side, we keep in touch with them, they get very close. They get very close to the production team. It's such a heavy experience for people. It's so transformative that yeah, you can't help but grow close to them. And they grow close, especially with, I think the team in the field and with the Fab Five," Gervais says.

Van Ness, Porowski, Berk, Brown and France do keep in touch with their heroes, occasionally posting updates on social media.

Sounds like a tearful reunion special in the making.