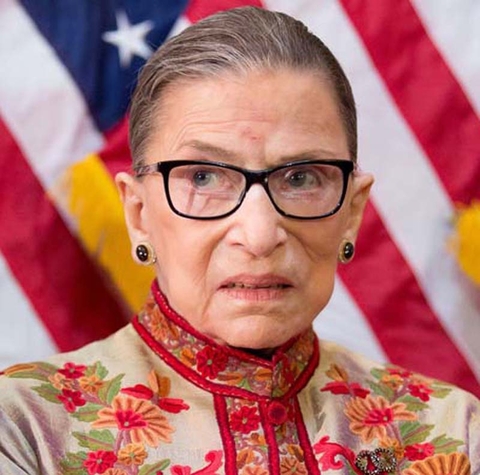 At the end of her 26th year on the Supreme Court, Justice Ruth Bader Ginsburg is going full bore. A series of public appearances this month demonstrate the three-time cancer survivor is speaking out and traveling as much as ever. At the court, her voice is more emphatic. She resists compromising with her conservative brethren.

The emphasis of the 86-year-old "Notorious RBG" is on the here-and-now, not the proverbial "long game" played by some colleagues like Chief Justice John Roberts taking incremental steps toward major decisions and ideological battles in the future.

Asked about any retirement plans on Wednesday night at a Washington, DC, event sponsored by Duke Law School, Ginsburg repeated a mantra: "I've always said I'll stay on this job as long as I can do it full steam."

At her age, she assesses that each year: "I was OK this last term. I expect to be OK next term. And after that we'll just have to see." Earlier this session, Ginsburg missed, for the first time in her tenure, two weeks of oral arguments as she recovered from cancer surgery.

Ginsburg is also plainly laying groundwork for what's next on the liberal wing.

In the most closely watched cases this session she assigned younger colleagues to speak for the left. Her earlier pattern as the senior liberal, since 2010, had been: she wrote, they signed. Now, when Ginsburg so chooses, the pattern is reversed.

She gave Elena Kagan the responsibility for the dissent in a major partisan gerrymandering dispute and in a case involving a property owner's challenge to court precedent on land regulation. She had Stephen Breyer wrote the opinion for liberals in the dispute over a citizenship question on the 2020 census. (Ginsburg and the other justices on the left went further than Roberts, who wrote the main decision keeping the question off the census form, in trying to invalidate the actions of Commerce Secretary Wilbur Ross for the decennial count.)

Kagan and Breyer leveled the strongest counterpunch this term to the Supreme Court conservative majority's reversal of decades-old precedents. As they made plain in dissenting opinions they penned (and Ginsburg joined) in May and June, their question is: What's next?

Ginsburg's in-this-moment approach and continued tenure on the nation's highest court matter. If she were to retire, President Donald Trump could have an opportunity to name a third conservative jurist. And Trump would not be naming a conservative for a conservative, as he did in 2017 and 2018, but a conservative for a liberal icon. The result would more heavily tilt the bench to the right, affecting dilemmas from women's reproductive rights to government's regulatory power.

Overall, Ginsburg has become more entrenched on the left and more unequivocal in her opinions. Separating herself from Kagan, age 59, and Breyer, 80, Ginsburg is unlikely to compromise with any of the five conservatives on this tightly divided court.

For example, she was joined only by Justice Sonia Sotomayor, age 65 and the fourth liberal, as she dissented to the majority's decision permitting a 40-foot high war memorial cross on public land in Maryland.

Ginsburg took the rare, dramatic step of reading portions of her statement from the court's mahogany bench.

"The Latin cross is the foremost symbol of the Christian faith, embodying the central theological claim of Christianity: that the son of God died on the cross, that he rose from the dead, and that his death and resurrection offer the possibility of eternal life," Ginsburg declared in the case of American Legion v. American Humanist Association, allowing the mammoth 1925 Bladensburg Peace Cross to stay in place.

"By maintaining the Peace Cross on a public highway," she added in her written opinion, "[government] elevates Christianity over other faiths and religion over nonreligion."

Ginsburg earlier in the year wrote alone in an Indiana abortion dispute, as colleagues compromised to resolve a pair of state appeals without oral arguments. She highlighted the larger constitutional issue looming as the majority reinstated an Indiana law that required abortion providers to dispose of fetuses in the same manner as human remains, either with burial or cremation.

The regulation, she wrote, could threaten "the right of a woman to choose to have an abortion before viability and to obtain it without undue interference from the state."

Ginsburg's public conversation with a Duke law professor Wednesday night was one of several appearances she has made in recent weeks, along with a mid-June Broadway jaunt and a mid-July trip to Lisbon, Portugal.

Visiting Broadway, Ginsburg saw "What the Constitution Means to Me," a play by Heidi Schreck that traces women's rights in America through Schreck's personal experience (beginning as a student debater) and national political events.

On the trip to a legal conference in Lisbon, Ginsburg was joined by Justice Sotomayor and retired Justice John Paul Stevens. Stevens died soon after, on July 16.

Ginsburg recounted at Stevens' Tuesday memorial service and on Wednesday evening that she had told Stevens her dream was to remain on the court as long as he had, until age 90.

When Ginsburg told the audience of about 200 at the event sponsored by Duke University law school that Stevens had said, "Stay longer," people burst into applause.

An appointee by Democratic President Bill Clinton, Ginsburg was confirmed by the Senate on August 3, 1993 and took her oath for the Supreme Court a week later. She was the second woman ever appointed to America's highest court, after Sandra Day O'Connor, who served from 1981 to 2006.

Ginsburg, a former women's rights lawyer who argued six groundbreaking cases before the justices early in her career, enhanced her reputation as a supporter of women's rights on the bench. Over time, she also wrote opinions advancing broader civil rights and liberties.

In 2013, Ginsburg's dissent for the liberals in Shelby County v. Holder, when the majority curtailed the reach of the Voting Rights Act, went viral on social media. It inspired the "Notorious RBG" meme, which has stuck as RBG has become the subject of books, films and assorted mementos.

During her tenure, Ginsburg has also survived three serious bouts with cancer. Last November, after she cracked three ribs, doctors discovered cancerous nodules from her lung, which were successfully removed.

Ginsburg returned to the bench in late February and soon after delivered a unanimous decision finding that the Constitution's protection against excessive fines covers state and municipal actions to seize property used in the commission of crimes. Such "civil forfeiture" has often ended up grossly disproportionate to a defendant's sentence.

Referring to that case of Timbs v. Indiana as a highlight of the recent session, Ginsburg on Wednesday observed that local governments have used such cash and property forfeitures to raise money for their coffers, a "very tempting" practice, she said.

In the courtroom setting, Ginsburg has seemed determined not to flag. In June, after returning from a New York trip with a serious case of laryngitis, she insisted on reading lengthy excerpts from an opinion for the majority in a Virginia racial gerrymander dispute. Her spare voice was difficult to hear.

Referring to more prominent decisions, such as regarding the 2020 census and partisan gerrymandering, Ginsburg on Wednesday noted matter-of-factly that she had signed onto opinions written by her liberal colleagues.

Ginsburg added to the dissent in the 5-4 decision case of Rucho v. Common Cause, preventing federal judges from reviewing extreme partisan gerrymanders: "It's very disheartening if you're in a district and you know that it's been rigged so no matter how you vote, it's going to come out for a certain party," she said Wednesday night.

She observed that people might believe it would be pointless to vote. "That's destructive of the democratic system," she said.

Ginsburg also reiterated an observation made in a New York speech last month that the retirement of centrist conservative Anthony Kennedy, succeeded by Brett Kavanaugh, would be of "greatest consequence" for the future of the divided court.

Of her own future, she said only that she was taking it "year by year."

And as she closed out the 90-minute session, Ginsburg remarked that she chose her career six decades ago because it offered dual personal and community benefits: As a lawyer, "you can earn a living," and "do something outside yourself that will make things a little better for people who are less fortunate than you."

That, she recalled, was "pretty nifty."