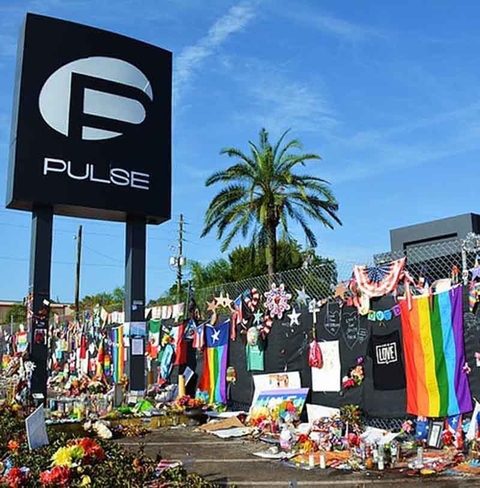 Memorials left outside the shuttered Pulse nightclub in 2016. File photo.

Mass shootings this past weekend left at least nine dead and 27 wounded at the Oregon District of Dayton, Ohio, and at least 20 dead and more than two dozen wounded at the Cielo Vista Mall in El Paso.

This tragedy comes more than three years since 49 lives — most of them Latinx — were taken in a mass shooting at Pulse nightclub in Orlando.

For decades, LGBTQ+ people have been a target for bias-motivated violence, and easy access to deadly weapons has compounded this threat. Common-sense gun violence prevention measures endorsed by LGBTQ+ advocacy group Human Rights Campaign (HRC). This includes banning access to assault-style rifles, expanding background checks, and limiting the ability for suspected terrorists and those with a history of domestic abuse to access guns.

“Team HRC Texas is horrified by the violence and tragic loss in our community last night,” said Rebecca Marquez, HRC Texas State Director. “Texans and all Americans deserve so much more. We need our legislators to take action. We need commonsense gun violence prevention now.”

“Enough is enough,” HRC responded to the murders of 29 Americans due to gun violence

“The entire HRC Ohio team is mourning Dayton and the families and loved ones of those who were murdered today in the second mass shooting in 24 hours,” said Shawn Copeland, HRC Ohio State Director. “Leaders in Ohio and across the nation must act now with commonsense gun violence prevention legislation.

“It’s about life and death.”

According to Everytown for Gun Safety, more than 33,000-gun deaths happen every year.