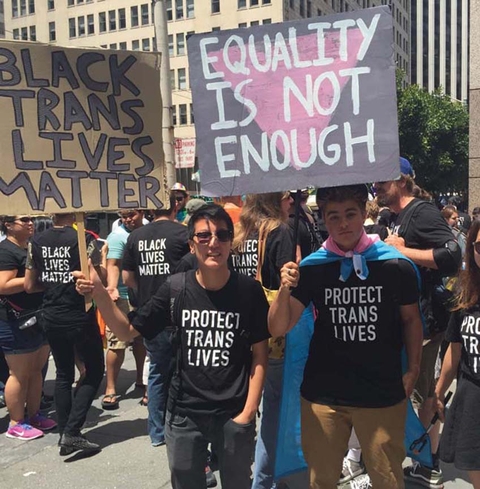 No, seriously, why don’t they matter? Doesn't it seem that brown and black trans women don’t matter to the cisgender and LGBTQ+ community? Oh yes, I dared to say LGBTQ+ community because if as many white trans women were being slaughtered, I firmly believe there would be non-stop vigils and more media coverage.

We are used to the straight, cisgender community not giving a damn, but when it comes to our own family, we can and should do better.

Almost every week for the entire year of 2019, I have seen on Facebook, the murder of these beautiful women with so much promise. Actually, Dallas did hold a vigil and community meeting about what to do to better protect trans women of color after the murder of Muhlaysia Booker in May. But after that vigil, the discussions were pretty much over.

It’s almost as if we are desensitized to all these murders. They did arrest a black man for Miss Booker’s murder, and he was connected to two others occurring within weeks of hers. The police released a statement saying they didn’t know the motive. Really? Cause the motive seems clear to me. When you have three individuals, all trans women of color, killed within weeks of each other, you can conclude that they were being targeted. They are, for sure, hate crimes.

Not only that instance, but a few weeks ago, I saw the most disturbing Facebook profile. The profile was that of a white trans woman with a cover photo, decorated with the traditional trans colors, stating “Trans Women for Trump.” I was led to it by another white trans female friend of mine who had posted about it in disgust.

On top of that, other white trans females were supporting her and the president. I could not believe my eyes, and it takes a lot to shock me. I figured if white trans people can be for this president – a man who takes trans rights away and is clearly racist – then it would not be so far-fetched to believe that the Trump-supporting trans women sadly would not care about black trans lives either.

I have only seen white trans males and other trans POC posting about justice for trans women of color. I wish I could see more of that from the lesbians, bisexuals, gays, and other people on the spectrum to stand up and yell for justice for their sisters.

Just like all the mass shootings in America, violence against trans women of color has become all too normal. We can create a new normal of creating such noise that the legislators across the country will have to take this seriously.