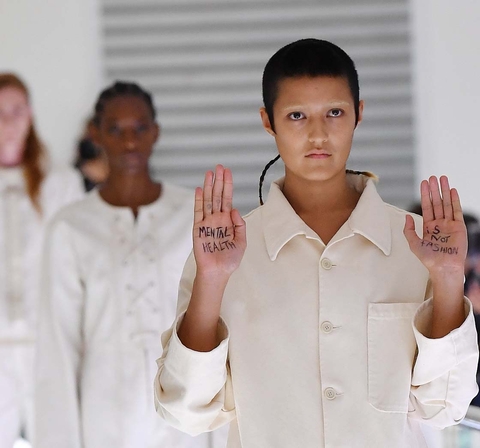 A runway model has staged a protest at Gucci's Spring/Summer 2020 show at Milan Fashion Week, describing the fashion house's decision to "use the imagery of straight jackets and outfits alluding to mental patients" as "unimaginative" and "offensive."

Ayesha Tan-Jones, a model in the show, held up their hands while on the runway to display the message "mental health is not fashion."

"As an artist and model who has experienced my own struggles with mental health, as well as family members and loved ones who have been affected by depression, anxiety, bipolar and schizophrenia, it is hurtful and insensitive for a major fashion house such as Gucci to use this imagery as a concept for a fleeting fashion moment," the model said in a statement posted to Instagram.

"It is in bad taste for Gucci to use the imagery of straight jackets and outfits alluding to mental patients, while being rolled out on a conveyor belt as if a piece of factory meat," Tan-Jones added.

"Presenting these struggles as props for selling clothes is vulgar, unimaginative and offensive to the millions of people around the world affected by these issues," said the model, who describes themselves as a non-binary artist and musician.

Gucci posted several images of the fashion show on Instagram, noting that the "utilitarian uniforms" were designed to be a statement and would not be made available to customers. The "blank-styled clothes" were intended "to represent how through fashion, power is exercised over life, to eliminate self-expression," the post explained.

The fashion house also pointed out that the straitjacket-inspired garments were just one part of its Spring/Summer 2020 collection. Made up of almost 90 looks, the range also featured a number of colorful items that Gucci designed as an "antidote" to the white utilitarian garments.

A spokesperson for Gucci could not immediately be contacted for comment on the protest.

This is not the first time the fashion house has found itself at the center of controversy.

In February, Gucci apologized and discontinued selling a sweater that social media users said resembled blackface because of its design.

In a Twitter post, the Italian luxury brand said it "deeply apologizes for the offense caused by the wool balaclava jumper."