First UC of Oklahoma to install the Rev. Diana Davies 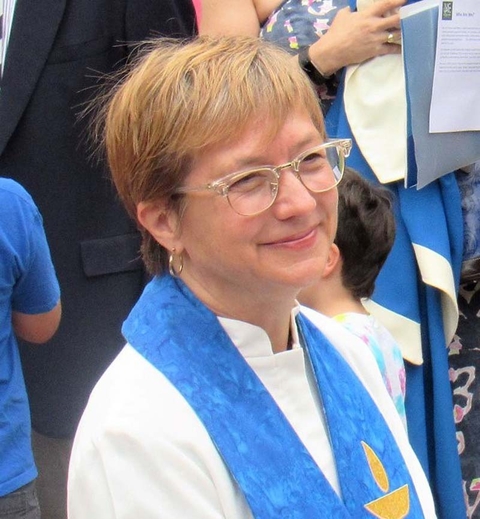 In the Unitarian Universalist (UU) faith tradition, installation is a pivotal moment in the life of the church. It is a time when a commitment is made to the future of the church, including a visioning of the shared work that is important for the congregation and its people, as well as for the role of the church in the community.

It is also a celebration of the faith’s dedication to the democratic process. In Unitarian Universalism (UU), each congregation calls its minister, so the UU relationship between congregation and minister is based in free choice. Installation is a formal affirmation of that choice.

Church President, Susan Bishop, notes, “Anytime a new minister is installed, it’s like a new era for the church. Reverend Diana was called to the church a little over a year ago, and we already have new congregants eager to be involved in what promises to be an exciting time in the history of our church.”

The Rev. David Carl Olson, lead minister at First Unitarian Church of Baltimore, will be delivering the sermon. Olson earned his Master of Divinity at Andover Newton Theological School, where he was actively working as the first staff person for the Meetinghouse Center for Theology and the Arts, and co-leader of the gay and lesbian concerns group GLANTS.

The theme of the installation is Ahimsa, a concept shared by Buddhist, Hindu, and Jain traditions, meaning nonviolence or universal compassion. It is the idea that inspired Mahatma Gandhi to utilize nonviolent resistance as a means to social justice, which, in turn, inspired Martin Luther King, Jr., and other civil rights leaders.

Notes the Rev. Davies, “Ahimsa is relevant to our congregation in a number of ways. It is a concept that crosses faiths, echoing the interfaith aspect of Unitarian Universalism, which draws from wisdom from multiple spiritual and secular traditions. Embodying interconnectedness also describes a relationship that is loving and kind but uncompromising in its focus on justice, the kind of culture we try to nourish at First Unitarian.”

First Unitarian Church of Oklahoma City, established in 1893, is closing out its 125th anniversary this year, making it one of Oklahoma City’s oldest communities of faith.

With a mission to explore the eternal, nurture community, and pursue the common good, First Unitarian is home to a welcoming and diverse community of people who ground their spiritual and daily lives in principles such as a commitment to the inherent worth and dignity of every person; justice, equity, and compassion in human relations; and respect for the interdependent web of all existence, of which we are a part.

All are invited to join the community for this event, as well as for Sunday activities, beginning at 10 a.m. on October 6. The event is open to the public. Please RSVP on the Facebook event by searching “Installation of Rev Dr Diana K Davies.”