Stand up and protect trans women of color 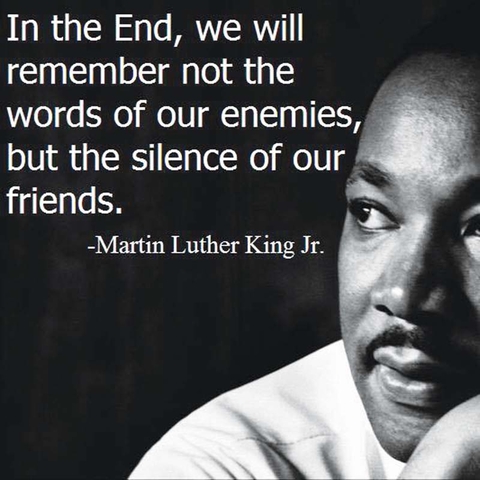 Most people start the year off with New Year’s Resolutions, so I am proposing the challenge to everyone in the LGBTQ+ to become better allies to trans women of color. “All for one and one for all” is the creed that we as allies and LGBTQ+ members should uphold when it comes to protecting these women who have disproportionate rates of murder compared to anyone under the LGBTQ+ umbrella.

January is when we honor Martin Luther King, Jr., so I decided to look up some of his lesser-known speeches to draw inspiration from for this month’s article. Dr. King had over 400 speeches in his lifetime. King stated in one of his speeches that “racism, economic exploitation, and war were all connected as 'triple evils.'”

What stood out to me was economic exploitation because so many trans women must do dangerous things to survive – sex work is one of them. If our society gave equal employment opportunities to trans people, this would not be such an issue.

King had a speech entitled A Time to Break the Silence in which he spoke out against the Vietnam War, but this reminded me of the need for the LGBTQ+ community to break its silence when it comes to trans issues. In many communities across the nation, we gather for a ceremony every year for TDOR (Transgender Day of Remembrance) but what do we do throughout the year? If we stay silent or don’t reach out to them, how will they know they have our 24 hours a day, seven days a week support?

I often wonder if Dr. King would have marched alongside the LGBTQ+. According to his life’s work, the answer is yes. He also would have marched and advocated for trans people (especially trans women of color). I’m sure Bayard Rustin, Dr. King’s openly gay advisor, would be marching right along with him carrying the beautiful pink, blue and white flag. Ah, a girl can dream, right?

Now on to solutions, because without them, words just flee. One solution would be to have a buddy system in which your trans friend could tell you where they will be going if they feel like it is a sketchy situation. You both could develop safe words that would alert you to call the police or come by to check on them. For instance, they could text you a short word, one they could do with one hand if they had to.

With that said, let us go into 2020 eyes and arms wide open. Will you join me? There is a war upon trans women of color. Grenades are being thrown all around them. Who will be their shield?

I will leave you with a Martin Luther King, Jr. quote. “In the end, we will remember not the words of our enemies, but the silence of our friends.”