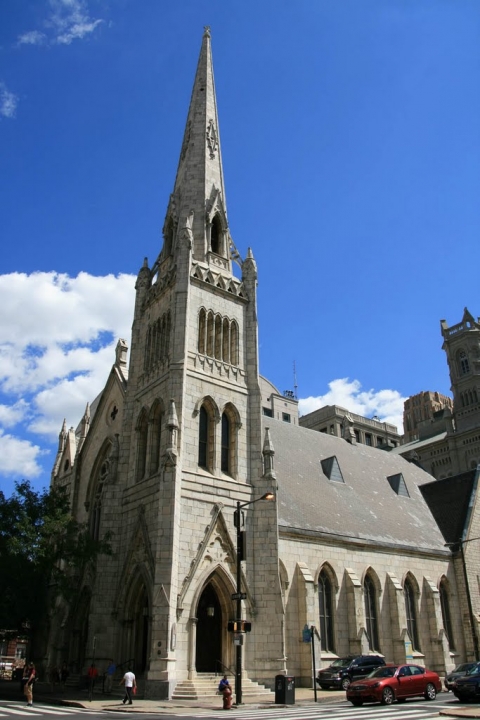 Philadelphia, AP — About 50 ministers gave their symbolic support to a colleague facing sanctions from the United Methodist Church by participating in a same-sex wedding.

The wedding Saturday in Philadelphia was held about a week before the Rev. Frank Schaefer of Lebanon, about 90 miles to the west, will face a church trial for officiating over his son's marriage to another man.

The clergy filled the front of the Arch Street United Methodist Church, blessing the marriage in defiance of church law, the Philadelphia Inquirer (http://bit.ly/16SXVdw ) reported.

The closest rested their hands on the couple, Bill Gatewood and Rick Taylor. The others placed their palms on other clergy.

"Those whom God has joined together, let no one put asunder," they said in unison.

A spokesman for the church's eastern Pennsylvania conference would not comment about whether any of the participants may face discipline. Most of the 50 are Methodist ministers.

Taylor, 55, and Gatewood, 70, told the newspaper that all they ever wanted was a traditional wedding — with a blessing in front of the altar, an exchange of vows and a reception in the basement.

The event was largely symbolic, as same-sex marriage is not legally recognized in Pennsylvania.

The couple, who met in a Philadelphia gay bar, have been together for 25 years. They said the church has helped them through some difficult times.

The Arch Street congregation, which is committed to the inclusion of people of all sexual orientations, had ministers who consoled them, added the names of their sick friends to the church's prayer lists and performed funerals when their friends died.

"That's why we want to get married in our church. We have many, many people who say, Why don't you just go to New York or Delaware?" Taylor told the newspaper. "And it's because we live in Pennsylvania and our church home is here and it means the world to us."

Schaefer, 51, could be suspended, reprimanded or lose his credentials because he performed a wedding ceremony for his son in 2007 in Massachusetts. He had informed his superiors about it beforehand and did not face any consequences until April, when a congregant filed a complaint.

The United Methodist Church formally accepts gay and lesbian members but teaches that homosexuality is not compatible with Christian teaching.

Schaefer's trial will begin Nov. 18 at a Methodist retreat in Spring City, about 35 miles northwest of Philadelphia. He could avoid trial by agreeing not to perform another same-sex marriage, but he has decided not to do that. Three of his four children are gay.
___

*NOTE -  Below is the note posted on the Arch Street United Methodist Church website (http://www.archstreetumc.org) from November 9th. A declaration of support from the clergy about performing same-sex ceremonies:

Same Gender Wedding Statement by the clergy and lay leadership of the Arch Street United Methodist Church on behalf of the Reconciling United Methodists of Eastern Pennsylvania:Today, Saturday, November 9, 2013 at three o'clock in the afternoon, 36 United Methodist Clergy and 9 clergy from other faith traditions presided over the marriage ceremony of a same gender couple.  In addition, 17 United Methodist Clergy and 8 clergy from other faith traditions, from all over the United States, had their names added to the marriage certificate by proxy.  During the wedding ceremony the loving and committed couple invited God and the congregation gathered to bless their union.  The couple became members of Arch Street United Methodist Church over 20 years ago.  Today they are rejoicing and praising God that their 25 year love for each other has been blessed by God in the church they love.  In contrast to The Discipline of the United Methodist Church which prohibits United Methodist clergy from performing same gender weddings, we pronounced that the couple is married in the eyes of God.  By this pronouncement, a loving couple will be affirmed spiritually and welcomed fully into the community of faith. In addition to celebrating and confirming a couple's love; we, the couple, the clergy and the congregation demonstrated our solidarity with the Reverend Frank Schaefer, United Methodist clergy, who faces a church trial for performing the same gender wedding of his son.  The trial is scheduled for Monday, November 18, 2013 at Camp Innabah, Pughtown, PA. The United Methodist Church in its current Discipline states in one breath that every person is a person of sacred worth and yet, in another breath, singles out homosexuality as being incompatible with Christian teaching.  Today, we challenged this contradiction, the hypocrisy it signals, its denial of scripture and the threat it poses to the integrity of our call by God to provide pastoral care to all. We acted as a matter of ecclesiastical conscience in the center of a compelling community context.  We believe that this act of pastoral care reflects the love of God and honors and abides by The Bible as well as the Discipline of the United Methodist Church as a whole, if not in part.   We are sad that our actions may cause some discomfort, pain and conflict within our circles of peers, friends, family members and neighbors.  We hope and pray that the Holy Spirit will provide a pathway to prayer-filled and positive interactions that will make a way out of what appears to be no way.  Yet, we will not let this circumstantial sadness stand in the way of the great day of rejoicing this is for the married couple, their church family, the participating clergy and the people of God gathered.   We are not anything special, really.  So many other people of faith, for many years before today, have made profound contributions to the movement of gay rights in the church.  For their witness and example we say thank you - well done good and faithful servants,  It is our honor and privilege to have been called by God to take our turn in contributing to a growing tradition and movement within the United Methodist Church that seeks to free the church from heterosexism, homophobia and hypocrisy and fill it with the all-inclusive, transforming love of God.   This Sunday, United Methodist congregations all over the world are being asked to hold candlelight vigils in support of the Reverend Frank Schaefer as he goes to trial.  Please join the growing number of United Methodists and their community partners in proclaiming the all-inclusive love of God. "Have the courage to light a candle for clergy and congregations and communities that live by the code of love." "For now we see in a mirror dimly but then face to face.  Now I know in part; then I will know fully, even as I have been fully known.  And now faith, hope and love abide, these three; and the greatest of these is love."  I Corinthians 13:12-13 "God is love, and those who abide in love abide in God, and God abides in them.  Love has been perfected among us in this: that we may have boldness on the day of judgment, because as he is, so are we in this world.  There is no fear in love, but perfect love casts out fear; for fear has to do with punishment, and whoever fears has not reached perfection in love."  I John 4:16-18