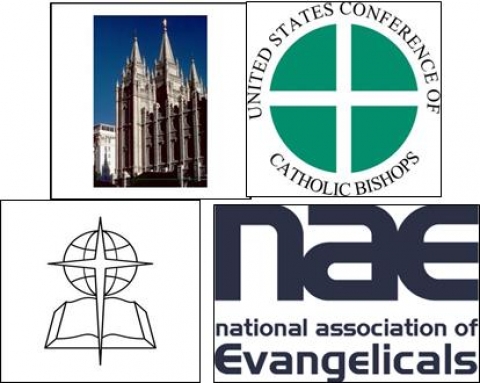 The religious groups urged the Supreme Court on the basis of 'tradition' and 'religious freedom' to uphold a state's right to disallow gay and lesbian couples to wed.

Salt Lake City (AP) — The Mormon church and four religious organizations are asking the U.S. Supreme Court to intervene and settle once and for all the question of whether states can outlaw gay marriage.

The Church of Jesus Christ of Latter-day Saints, in a statement Friday, said it joined a friend-of-the-court brief asking the high court to hear Utah's marriage case.

Also taking part in the filing were The United States Conference of Catholic Bishops, the National Association of Evangelicals, the Ethics & Religious Commission of the Southern Baptist Convention and the Lutheran Church-Missouri Synod.

Each teaches that marriage is between a man and a woman.

"The time has come to end the divisive national debate as to whether the Constitution mandates same-sex marriage," the brief states.

Multiple organizations and governmental entities on both sides of the debate have filed similar briefs asking the court to take up the issue.

The religious groups urged the Supreme Court on the basis of tradition and religious freedom to uphold a state's right to disallow gay and lesbian couples to wed.

"Legal uncertainty is especially burdensome for religious organizations and religious believers increasingly confronted with thorny questions," the brief says. "Is their right to refrain from participating in, recognizing or facilitating marriages between persons of the same sex, contrary to their religious convictions, adequately shielded by the First Amendment and other legal protections? Or is further legislation needed to guard religious liberties in these and other sensitive areas?"

The plaintiffs said they asked for the review even though they won at the federal appellate court level because they want the Supreme Court to weigh in on whether state same-sex marriage bans violate the Constitution.

The high court is under no obligation to take Utah's case or the others.