Sam Smith, Beyonce up for 5 Grammys each 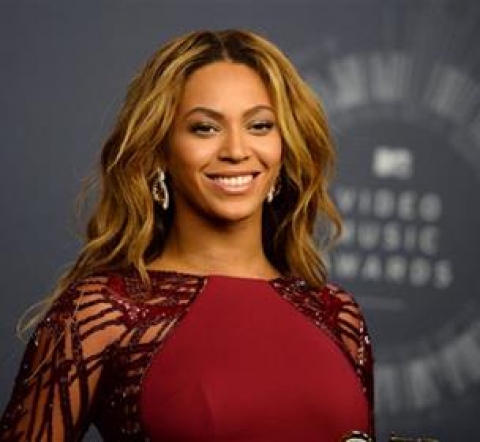 British newcomer Sam Smith and Beyonce, shown here - the most nominated female in Grammy history - are the current leaders at the Grammy Awards with five each, with possibly more to come. (Photo by Jordan Strauss/Invision/AP, File)

New York (AP) — British newcomer Sam Smith and Beyonce — the most nominated female in Grammy history — are the current leaders at the Grammy Awards with five each.

Smith and Beyonce will likely earn nominations for album of the year, the top award, when The Recording Academy announces the nominees Friday night on "A Very GRAMMY Christmas" (9 p.m., CBS).

Smith is the real leader so far: He's up for key awards such as best new artist and song and record of the year for his hit "Stay With Me."

Beyonce, surprisingly, was not up for song or record of the year. Her nominations include best urban contemporary album for her fifth album as well as R&B song and R&B performance for "Drunk in Love."

For song and record of the year, Smith's "Stay With Me" will battle Taylor Swift's "Shake It Off," Meghan Trainor's "All About That Bass" and Sia's "Chandelier."

Iggy Azalea's "Fancy" is nominated for record of the year, while Hozier's "Take Me to Church" is up for song of the year, a songwriter's award.

Sia, who also earned four nominations, had a breakthrough this year with "Chandelier" after writing songs for other singers, from Rihanna to Beyonce to Katy Perry.

Smith's five nominations include best pop solo performance and pop vocal album for his debut, "In the Lonely Hour," one of the year's top-selling albums. The big-voiced singer will battle Ed Sheeran, Miley Cyrus, Ariana Grande, Katy Perry and Coldplay in the latter category.

Pharrell's "Happy" and John Legend's "All of Me," tunes that peaked at No. 1 on the Billboard Hot 100 this year, were technically released before Grammy eligibility, so the singers submitted live renditions of the songs so they could be considered for awards. They didn't earn nominations in the top awards, but the hits will compete with "Stay With Me," ''Shake It Off" and "All About That Bass" for best pop solo performance.

Pharrell earned three nominations, including best urban contemporary album for "G I R L," where he will battle Beyonce's surprise album. The pop queen is also nominated for best surround sound album for "Beyonce" and music film for her "On the Run" tour with Jay Z. Beyonce has won 17 Grammys so far.

U2's "Songs of Innocence," originally released for free to iTunes users, is up for best rock album. Other nominees include Beck, Tom Petty & the Heartbreakers, Ryan Adams and the Black Keys.

Lady Gaga and Tony Bennett's duets album, "Cheek to Cheek," is nominated for best traditional pop vocal album, where it will compete with Barbra Streisand's duets album as well as efforts from Annie Lennox, Johnny Mathis and Barry Manilow.

The soundtrack for "Frozen," the year's top-selling album, earned three nominations in the music for visual media category, including best compilation soundtrack, score soundtrack and song for "Let It Go."

The late Joan Rivers earned a nomination for best spoken word album for "Diary of a Mad Diva."

The Grammy Awards will air live Feb. 8 from the Staples Center in Los Angeles.

By Mesfin Fekadu, AP Music Writer. Copyright 2014 The Associated Press. All rights reserved. This material may not be published, broadcast, rewritten or redistributed.