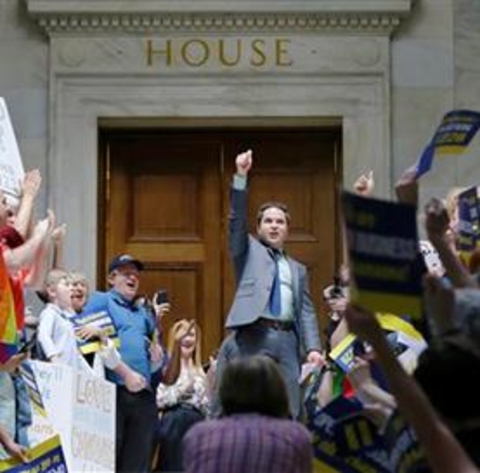 Little Rock, Ark. (AP) — The fight over "religious freedom" proposals facing increasing criticism from businesses and advocates who call them a license to discriminate against gays and lesbians has shifted toward Arkansas, which was poised to become the second state this year to enact such a measure.

A final vote could come as early as Tuesday in the state House on the proposal that would prohibit state and local government from infringing on someone's religious beliefs without a "compelling" reason. Unlike Indiana — where Republicans were working on adding language to clarify the state's recently enacted law after a firestorm of protests — Arkansas lawmakers said they weren't seeking to modify the measure.

"There's not really any place to make any changes now," Republican Rep. Bob Ballinger of Hindsville said about his proposal. "If there are questions in two years we can fix it."

The protests echo the backlash in Indiana, where Republican Gov. Mike Pence signed a similar bill into law last week. Some companies and organizations have canceled future travel to Indiana or halted expansion plans in the state, and Republican legislative leaders said they are working on adding language to Indiana's law to make it clear that the measure does not allow discrimination against gays and lesbians.

Similar proposals have been introduced in more than a dozen states, patterned after the federal Religious Freedom Restoration Act of 1993. Nineteen other states have similar laws on the books.

Republican Gov. Asa Hutchinson, who had expressed reservations about unintended consequences of an earlier version of the bill, has said he'll sign the current measure into law.

"If this bill reaches my desk in similar form as to what has been passed in 20 other states then I will sign it, but I am pleased that the Legislature is continuing to look at ways to assure balance and fairness in the legislation," Hutchinson said in a statement Monday.

Opponents of the bill hoped to target Hutchinson's promise to be a "jobs governor" made during his successful bid last year for the state's top office. The Human Rights Campaign, the nation's largest lesbian, gay, bisexual and transgender rights group, has run ads in Silicon Valley aimed at the same technology firms Hutchinson has said he wants to lure to Arkansas.

Apple CEO Tim Cook wrote an op-ed in The Washington Post over the weekend opposing the Arkansas and Indiana measures, while retail giant Wal-Mart has said the proposal sends the wrong message about its home state. Little Rock-based data services company Acxiom also urged Hutchinson to veto the bill, saying the measure would enable discrimination and open the state up to ridicule.

"This bill is at direct odds with your position that 'Arkansas is open for business,'" CEO Scott Howe and Executive Vice President Jerry C. Jones wrote Monday in a letter to the governor.

In Indiana, the fallout has ranged from the public-employee union known as AFSCME canceling a planned women's conference in Indianapolis this year because of the law to the band Wilco saying it was canceling a May performance.

Virginia Gov. Terry McAuliffe issued an open letter to Indiana corporations saying Virginia is a business-friendly state that does "not discriminate against our friends and neighbors," while Chicago Mayor Rahm Emanuel sent letters to more than a dozen Indiana businesses, urging them to relocate to a "welcoming place to people of all races, faiths and countries of origin."