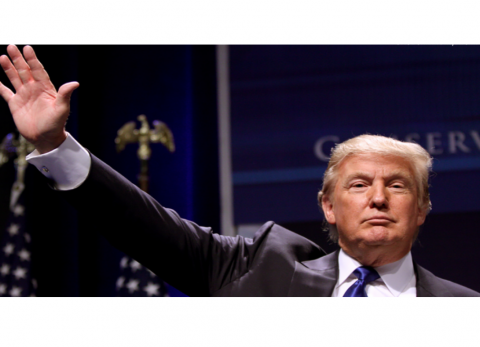 Donald Trump is being compared to Adolf Hitler. (AP Photo)

(Tuesday, March 8, 2016) – Today on ABC’s “Good Morning America” Donald Trump refuted his comparison to Adolf Hitler. A new practice at Trump’s rallies has been compared to Nazi Germany’s “Heil Hitler” hand sign, as the entire audience and Trump himself raise their right hands high in support of his campaign or his remarks against certain religious or minority groups.

In response to these claims, Trump said, “I don’t know about the Hitler comparison. I hadn’t heard that.”

In addition to ABC’s remarks, the former Mexican Presidente Vicente Fox said recently that Trump “reminds me of Hitler.” To add to the assertion, Anne Frank’s living stepsister said on International Holocaust Remembrance Day that Trump is “acting like another Hitler.”

A meme is also being circulated that compares Trump’s slogan to a line in the devastating Holocaust tragedy “The Boy in the Striped Pajamas”, wherein a German girl speaks of Hitler. She says, “He’s making the country great again.” Next to her caption is a photo of Trump sporting his slogan, “Make America Great Again,” and then the statement, “This is honestly terrifying.”

Regarding the most recent claims about his “Heil”-esque hand signs, Trump went on to say, “Honestly until this phone call I didn’t know it was a problem.