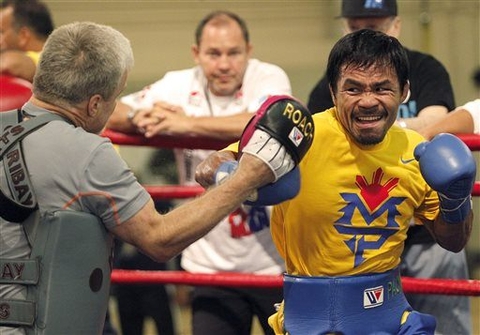 Pacquiao was leaving a restaurant in Los Angeles when he was attacked. (AP photo)

LOS ANGELES – Homophobic boxer Manny Pacquiao was reportedly attacked as he was leaving a restaurant in Los Angeles.

The unnamed assailant targeted the boxer because of his controversial view on same sex marriage. The eight-time world boxing champion garnered attention and outrage after calling gay couples "worse than animals" earlier this year.

“It’s common sense,” he said. “Will you see any animals where male is to male and female is to female? The animals are better. They know how to distinguish male from female. If we approve male on male, female on female then man is worse than animals.”

One of Pacquiao’s entourage, Edward Luna, quashed the altercation: “I really thought he would hit Manny. He almost got to him.”

Pacquiao’s anti- LGBT comments caused him to lose many endorsements, including a sizeable paycheck from Nike, who described his views as “abhorrent” after dropping him.

Pacquiao was not harmed during the altercation.