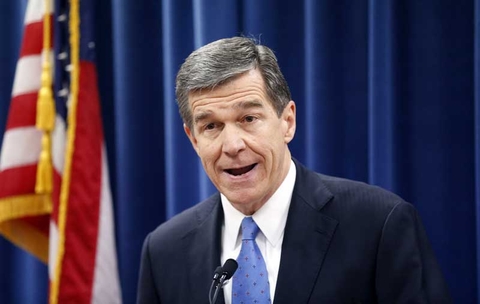 In a surprise special session in the dying days of the old administration, some say, the Republican-dominated legislature has thrown the government into total disarray, introducing bills aimed at emasculating incoming Gov. Roy Cooper's administration.

Cooper, the current attorney general, has threatened to sue. And many in the state are accusing Republicans of letting sour grapes over losing the governor's mansion turn into a legislative coup that flies in the face of voters.

"I believe fervently in democracy. I'm watching it be undermined ... by people who seem unwilling to consider or to listen," said Margaret Toman, who was among hundreds of protesters rallying inside the Legislative Building on Wednesday and Thursday, demanding that Republicans leave Cooper's authority alone.

The protesters were so loud that Senate and House cleared the galleries, and at least 16 people were arrested. As they were led away in plastic ties, supporters chanted, "this is what democracy looks like" and "shame."

Republicans are considering scaling back the number of political appointees Cooper can make and require the Senate's approval for top administrators at state agencies. They also are talking about erasing the governor's ability to shape elections boards statewide.

Republicans insist the legislation is simply adjusting the constitutional powers already granted to the General Assembly. They've said many of the provisions had been debated for years but always got set aside.

"There's probably no better time than to deal with it in the present," said Republican Rep. Bert Jones.

Democrats said it was a GOP power grab occurring a week after Republican incumbent Gov. Pat McCrory conceded a race he lost by just over 10,000 votes.

"It is done in a blatant political move by a party that must be afraid of the voters so they have to hold onto the power that they have," said Democratic Rep. Graig Meyer.

Whatever bills get final approval, likely to come Friday, will head to the governor's desk, but it's unclear what would happen next. McCrory, who hasn't commented publicly, could veto or sign the bills, or they could become law without his signature — and before Cooper takes office Jan. 1.

Republicans gained power of both legislative chambers in 2010 for the first time in more than a century, and they have veto-proof majorities.

Cooper ran on a platform of defeating Republicans' agenda, saying he would work to repeal a law known as House Bill 2 that limits LGBT rights.

"If I believe that laws passed by the legislature hurt working families and are unconstitutional, they will see me in court," Cooper said.

Republicans pointed to past sessions of the General Assembly, when it was dominated by Democrats. Democrats stripped the powers of the first and only GOP lieutenant governor of the 20th Century in the late 1980s. But Democrats said there's been no such widespread effort to limit the power of an incoming executive before he took office.

Kinnard reported from Columbia, South Carolina. Follow her at http://twitter.com/MegKinnardAP and read more of her work at http://bigstory.ap.org/content/meg-kinnard/