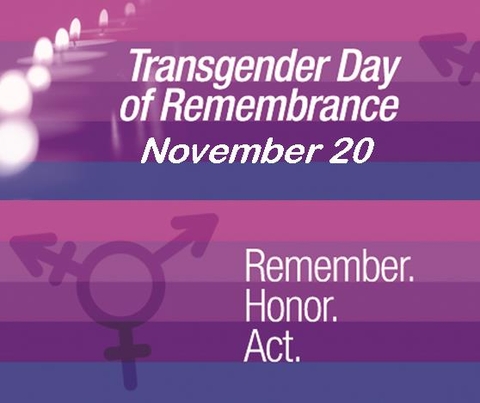 As a gay white man from Oklahoma, November is no longer a month-long celebration of Thanksgiving and fall decor as it was before I came out of the closet.

Education comes over time and exposure. While I was in the closet I wasn't getting a lot of exposure to LGBT+ issues. Now, however, November will forever and always be Transgender Awareness Month for me.

For the last three years I have helped organize Transgender Day of Remembrance events at my 9-5 job to honor the lives of those we lost due to some of the most heinous acts of hate. For three years we have been printing out the list of names of individuals who've been murdered because they were trying to live their lives as their authentic selves and affixing them to rainbow LED candles. We create a vigil with these candles and ask employees to take one to have their own personal vigil for the person the candle represents.

Included on the print out with the names is the location, age and way in which that person was killed. Seeing the horrific ways in which people are murdered simply for being different has etched into my mind the fact that we live in a cruel world. This harsh reality is one that doesn't need to exist and yet, unfortunately, the underlying issues that led to these deaths are not being addressed with any fidelity toward ending transphobia.

The new minority whipping boy du jour of the extreme right wing and the Republicans who turn their hate into policy is the transgender community. The bathroom bills we've seen proposed across the country have almost all come from Republican-led legislatures.

The result of these bills has been to create a farce of a policy used to divide people over an issue to the extreme detriment of the people the bill targets.

Now we must contend with Commander in Chief Donald Trump, who wants to ban transgender individuals from the military against the better judgment of his top generals. Again, the Republican party through their standard bearer has chosen to attack a group of true patriots to further polarize the electorate.

It can’t be easy being trans. I can't imagine how difficult it must be to be born into the wrong body and to have to figure that out over time. I don't know what it’s like to have to weigh the decision of a terrible status quo versus a possibly life-threatening surgery to live in the body I should have been born into.

But I know what it’s like to be targeted by legislation that is meant to harm me solely for advancing division in order for a political party to benefit. It’s already tough enough for our trans family but these actions only add insult to injury by targeting this already persecuted community.

While we go through our lives, our perspectives on issues change over time. We are given new information and details are elucidated. Even our ability to discern nuanced relationships between data is enhanced over time.

Naturally, with age and experience our simple world becomes more and more complex. However complicated things seem to become with all these new abilities and information, sometimes it’s a good thing to remember the simple view of things.

We cannot forget those earliest lessons we learn about love and accepting everyone regardless of their differences for we all are human. And so I say to those who maliciously malign the trans community, do the right thing and love your transgender neighbor. Show them that love in your words and actions.