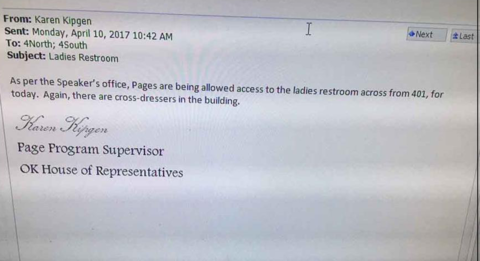 Today is HIV Awareness Day at the Oklahoma State Capitol, as well as lobbying days for a variety of other issues, including school funding.

Included in the groups visiting the capitol are many transgender and gender non-conforming people. A memo was sent by Karen Kipgen, Page Program Supervisor for the Oklahoma House of representatives, saying, “As per the Speaker’s office, Pages are being allowed access to the ladies restroom across from 401, for today. Again, there are cross-dressers in the building.”

It appears that House Speaker Charles McCall or at least his office, was aware that the memo was being sent.

Toby Jenkins, Executive Director of Oklahomans for Equality, is at the capitol with a group of students for a lobbying day. The group is there to lobby the legislature on school funding.

Jenkins said, “We were just told that the message was sent to legislators and their pages that there were ‘cross-dressers in the building.’ We arrive and we have several transgender and gender non-conforming kids in our group. They’ve been visiting legislators and using the bathroom they are comfortable with.”

Then they heard about the memo. Jenkins said, “They used the term ‘there are cross-dressers in the building.’ That’s a term of derision and bigots, not the language that educated informed people use. That is insulting and shameful. We felt like they ought to know they feel like they need to be afraid of us. We are proud to be with Oklahomans for Equality.”

Jenkins told his group, “I would like for you to use the bathroom like you have been doing all day. These are public bathrooms, paid for by public tax dollars. We won’t leave today without understanding this is the people’s house.

“We will go to the Speakers office all together (OkEq group) to talk about this.”

A call to the House Speaker's office went to voicemail. As of press time, the call had not been returned.

As this situation develops, TheGaylywill update information on this hateful, offensive memo, at www.gayly.com and on our Facebook page, The Gayly.