OKC’s gayborhood is getting a makeover 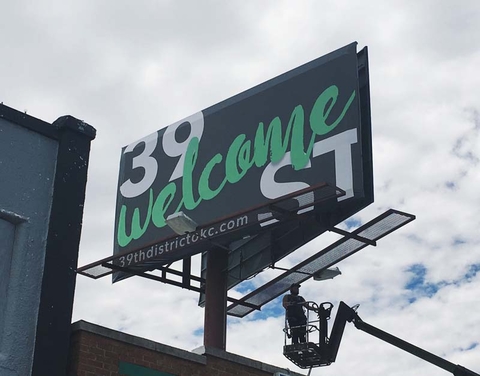 The 39th St. District billboards can be seen from all areas coming into the area. Photo provided.

OKC’s popular 39th St. District or more commonly known “the gayborhood,” has undergone and will undergo more changes. These changes have and will improve the area for Oklahoma’s LGBTQ+ community.

“There haven’t been a lot of changes yet,” said Lauren Zuniga, Director of the 39th St. District. “We are excited about getting an entirely new street. People have been positive about the changes so far.”

Zuniga said the 39th St. District has been recommended as one of the first street enhancement projects for the Better Streets, Safer City sales tax.

“It will be similar to what the Plaza District got but with our flavor,” she added.

In addition to these future changes, the District has received some improvements including a new “welcome” billboard, trees, benches, rainbow street sign toppers and pole banners.

“It’s funny to me that we are nicknamed the ‘gayborhood,’ but it doesn’t feel very vibrant or welcoming on this street,” Zuniga said. “And that’s what I think of when I think of gay culture.

“Our main goal is to make this district, a vibrant, fun district where everyone feels welcome.”

The 39th St. District organization hosts a meeting the last Thursday of each month. In July, Oklahoma City Mayor David Holt came to talk with people about what they’d like to see. Director of Public Works Eric Wenger and members of the OKC Planning Department were also there.

“The process has begun,” said Eric Wenger at the meeting.

According to Zuniga, 39th St. District plans to work with several organizations through Oklahoma City.

“We’re working on collaborations with Curbside Chronicle vendors and Oklahoma Mural Syndicate (Plaza Walls) to do some murals throughout the district,” Zuniga said. “I am really interested in collaborating with other organizations who are already making OKC a better place to live.”

The organization is also applying for grants to put in a dog park or a place for community members to gather outside.

In 2013, 39th St. District Association was formed and is in a contract with the city as part of the Commercial District Revitalization Program. The president of the board is Craig Poos, vice president is John Gibbons, the treasurer is Jon Priebe and Pastor Neill Coffman serves as member-at-large.