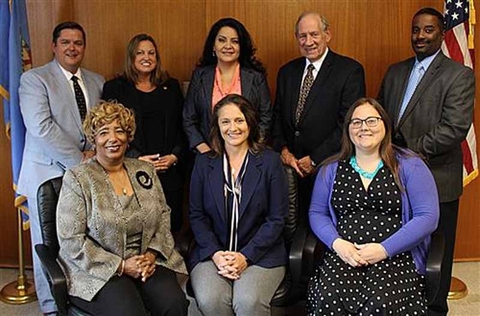 “I’m super proud of the board, and super proud of OKCPS,” said Oklahoma City Public Schools Board Chair Paula Lewis, talking about the passage Monday night of a board resolution recognizing LGBTQ Pride Month. The resolution passed unanimously.

The resolution noted the existing policy of the board, saying, “Whereas, it is the policy of the Board that OKCPS shall not discriminate on the basis of race, color, national origin, sex, disability, age, religion, sexual orientation, gender identity or expression, genetic information, alienage, veteran, parental, family and marital status.”

The non-discrimination policy has included sexual orientation and gender identity or expression for several years.

“What I’d like to see is an overarching standard – not just protection but a sign of support,” Lewis continued. She said that several people in the district had mentioned passing a resolution supporting Pride Month. She and Board Member Mark Mann, from OKCPS’s District Four discussed it, and Mann drafted what Lewis describes as a strong resolution.

“Positive reaction is all we’ve had,” said the Board Chair of the Pride Month resolution. She believes that is, “because it has to do with kids, and a national month; it’s recognition, it’s not giving ‘additional rights’. It’s saying we are recognizing these kids, our staff and our community.

“We want OKCPS to be a sought after district. We have to be proud of the kids that go to our schools. Many of our kids are minorities or marginalized. We want them to know that OKCPS is a great place to be. We are a good district, we have strong kids, artistic kids,” Lewis concluded. 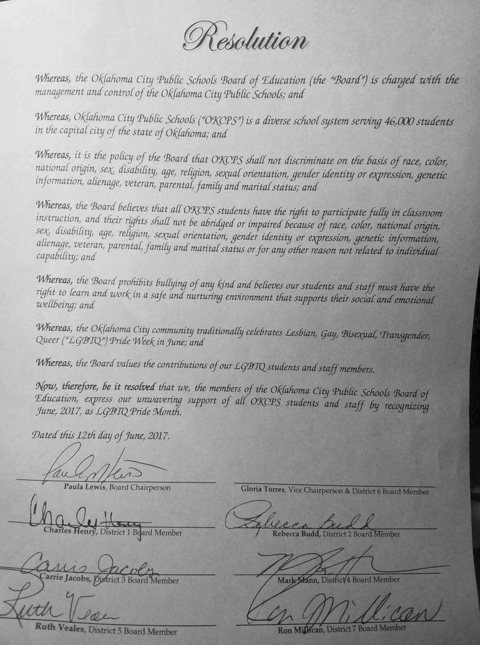