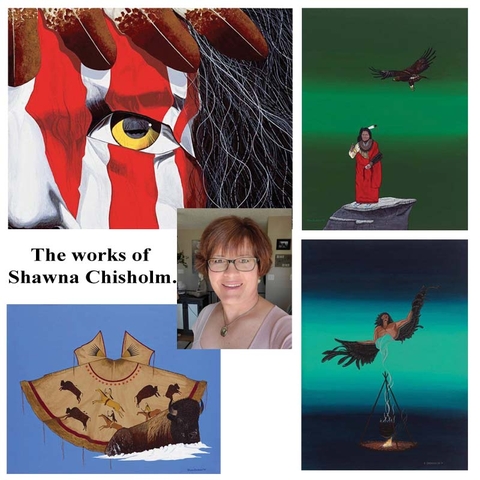 Oklahomans for Equality (OkEq) is excited to present their March 2020 showcase and exhibit of local artists at the Dennis R. Neill Equality Center. The event will feature the works of Shawna Chisolm, a two-spirit, transgender Native American.

The March event will begin with a reception on Thursday, March 5, from 6-9 p.m. and continuing throughout the month.

Chisholm is a proud two-spirit or Transgender Native American woman who has spent her life defending and fighting for the things she believes in; her family, her country, and spreading the ideals of her Native American heritage. She has spent over 30 years in military services and is currently a Warrant Officer in the United States Army and has served 16 months in Afghanistan.

She was born in Tulsa, Oklahoma, the daughter of two artists.

"I am a self-taught artist, but I had excellent art teachers in my elementary and high school years and have been painting Native American art since 1991."

The works of this artist (acrylic on canvas) reflect her enthusiasm for expressing her inherent culture. With each piece she creates, the artwork title and meaning tells a story, her goal is to increase awareness of Native American culture and its struggles.

Of note, the artwork is signed Shane up until December 2017 when her name legally changed to Shawna Chisholm.

The show will begin with a reception on Thursday, March 5, from 6-9 p.m. at the Dennis R. Neill Equality Center, located at 621 E. 4th Street in downtown Tulsa. There will be a door prize drawn at the reception with the winner receiving a piece of work from the artist. The show continues through March.