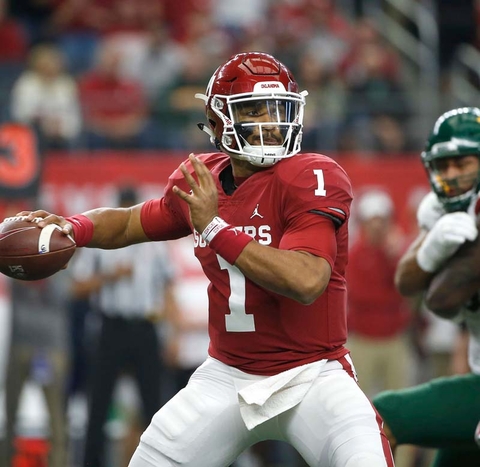 The Sooners survived No. 7 Baylor 30-23 in overtime to win the Big 12 championship game in Arlington, Texas, on Saturday. It's Oklahoma's fifth consecutive Big 12 title.

With Georgia's loss today (37-10, LSU) in the SEC championship game, it could give the Sooners their third College Football Playoff berth in a row.

Meanwhile, in Indianapolis, No. 1 Ohio State is a solid favorite against No. 8 Wisconsin in the Big Ten title game, as the Buckeyes already beat the Badgers 38-7 in the regular season. No. 3 Clemson, the defending national champion, is heavily favored against No. 23 Virginia in the ACC title game in Charlotte, North Carolina. Those games kick off later Saturday.

Oklahoma (12-1) entered the week ranked sixth in the College Football Playoff ranking. But the Sooners got a boost when No. 5 Utah lost 37-15 to No. 13 Oregon in the Pac-12 title game in Santa Clara, California, on Friday.

Sooners quarterback Jalen Hurts, who had spent the previous three seasons at Alabama before transferring to Oklahoma, completed 17 of his 24 passes for 287 yards and one touchdown.

With the Crimson Tide, Hurts played in six College Football Playoff games, starting four, and winning the national title in 2017.

"I hope the story ain't over," Hurts said to ABC.

Baylor, which two years ago had a record of 1-11, drops to 11-2 on the season. Both losses are to Oklahoma.

Prior to Friday's loss, Utah (11-2) hoped for a playoff bid or a spot in the Rose Bowl. Instead, after a game that was mostly one-sided in Oregon's favor, the Utes left with neither. They may fall all the way down to the Alamo Bowl.

The Pac-12 hasn't had a playoff team since 2016, when Washington lost to Alabama in the Peach Bowl.