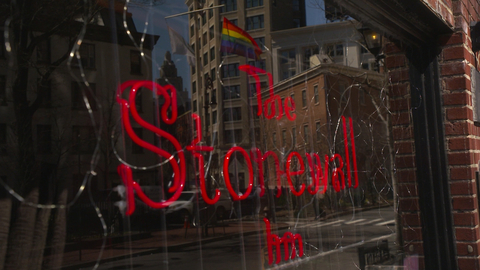 Faced with mounting bills and uncertainty around when it can reopen, the Stonewall Inn has started an online fundraiser to ensure the iconic LGBTQ landmark won't close its doors for good.

It's not going to close tomorrow or the next day, co-owner Stacy Lentz told CNN, but the Stonewall Inn's future is in jeopardy. Payments for the bar's insurance and rent, in addition to normal operating costs, continue to mount even though coronavirus has closed their doors.

The bar received some Paycheck Protection Program funds, but it was significantly less than the owners had expected, Lentz says. The bar sits next to the Stonewall National Monument, a national park, but it does not receive any federal funding.

The drinks the bar is serving through a window to patrons outside aren't cutting it either.

The Stonewall Inn is allowed to serve outdoors because New York has entered phase two of reopening. But Lentz says those sales are not making a dent in the bills.

Money raised through GoFundMe, according to Lentz, will go directly to the rent and insurance payments. The goal is to raise $100,000, which is just enough to get them out of the red, she says.

Lentz and the other owners are concerned that when they fully reopen tourists and their patrons won't return.

The modern gay rights movement began at the Stonewall Inn. On June 28, 1969, a police raid on the gay bar sparked a days-long riot in New York's Greenwich Village by its patrons, which included Black and Latin trans icons Marsha P. Johnson and Sylvia Rivera.

To donate to the Stonewall Inn's fundraising campaign, click here.