Parents, save up: Cost of raising a child is more than $233K 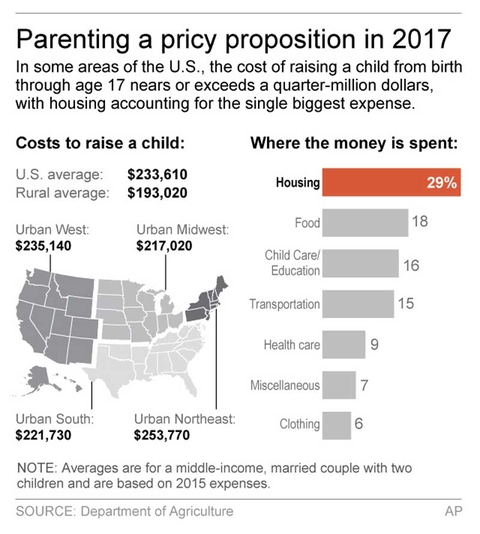 The Department of Agriculture says the estimated cost of raising a child from birth through age 17 is $233,610, or as much as almost $14,000 annually. AP photo.

The Department of Agriculture says the estimated cost of raising a child from birth through age 17 is $233,610, or as much as almost $14,000 annually. That's the average for a middle-income couple with two children. It's a bit more expensive in urban parts of the country, and less so in rural areas.

The estimate released Monday is based on 2015 numbers, so a baby born this year is likely to cost even more. It's a 3 percent increase from the prior year, a hike higher than inflation.
Since 1960, USDA has compiled the annual report to inform — and probably terrify — budget-preparing parents. State governments and courts also use the information to write child support and foster care guidelines. The main costs include housing, food, transportation, health care, education, clothing and other miscellaneous expenses.

Things to know about how much it costs to raise a child:

Up to a third of the total cost is housing, accounting for 26 to 33 percent of the total expense of raising a child. USDA comes up with those numbers by calculating the average cost of an additional bedroom — an approach the department says is probably conservative, because it doesn't account for those families who pay more to live in communities that have better schools or other amenities for children.
___
URBAN VS. RURAL DIFFERENCES

After housing, child care, education and food are the highest costs for families. For a middle-income couple with two children, food costs make up about 18 percent of the cost of raising a child. Child care and education costs make up 16 percent.
Education costs have sharply risen since 1960, when USDA estimated that those expenses were around 2 percent of child-rearing expenses. The report says this growth is likely due to the increased number of women in the workforce, prompting the need for more child care.
The numbers don't even include the annual cost of college, which the government estimates is $45,370 for a private college and $20,090 for a public college.
___
OLDER KIDS ARE MORE EXPENSIVE

New parents may flinch at the costs of diapers and baby gear, but it's going to get worse. While a child costs around $12,680 when he or she is between 0 and 2, a teenager between 15 and 17 costs around $13,900 annually.
USDA says food, transportation, clothing and health care expenses all grow as a child ages. Transportation costs are highest for the oldest children, perhaps because they start driving, and child care and education costs are highest for six and under.
___
MORE KIDS, LOWER COSTS

There is some good news for big families. Families with three or more children spend an average of 24 percent less per child. USDA says that's because children often share bedrooms in bigger families, clothing and toys are handed down and food can be purchased in larger and more economical packages. Also, private schools and child care providers may offer sibling discounts.
In contrast, one-child households spend an average of 27 percent more on the single child.