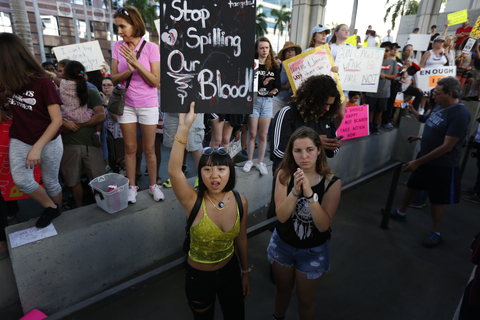 (CNN) -- Two survivors of the Parkland, Florida, school shooting slammed politicians' responses to the massacre, calling them "disgusting" and "pathetic" in a Monday morning appearance on CNN's "New Day."

Emma Gonzalez, whose speech in favor of gun control went viral four days after 17 people were killed by a former student at Marjory Stoneman Douglas High School, spoke out against her state's Republican senator, Marco Rubio, who has doubted that proposed gun laws would have prevented the massacre.

"They say that criminals get guns no matter what laws you have in place. That might be true, but we don't have to encourage them to get those guns," Gonzalez told CNN's Alisyn Camerota. "We can make it harder ... and we can prevent some seriously nasty crimes and some seriously indescribable tragedies from occurring. And if somebody doesn't want to do that at this point, that's pathetic."

Gonzalez's classmate, David Hogg, who has publicly called on lawmakers to "take some action" against guns in the wake of the shooting, responded similarly. "It's absolutely terrifying, the fact that he immediately got up and started talking about how gun control is not the solution. Every answer is the solution at this point because we haven't tried any of them."

Hogg also responded to President Donald Trump's tweet casting blame for the tragedy on the FBI, declaring, "I think it's disgusting, personally."

The senior then pointed out that Trump himself is in charge of the FBI.

"I do want to reiterate that the FBI were some of the amazing first responders who were helping us get to safety and the fact that he wants to discredit them in any way and that he's trying to shift our focus onto them is -- it's not acceptable," Gonzalez said.

The students also criticized the National Rifle Association and lawmakers who take money from the organization.

Of the politicians who receive financial contributions from the NRA, Gonzalez said, "We keep telling them that if they accept this blood money, they are against the children ... You're either funding the killers, or you're standing with the children. The children who have no money. We don't have jobs, so we can't pay for your campaign. We would hope that you have the decent morality to support us at this point."

Hogg agreed, asking, "If you can't get elected without taking money from child murderers, why are you running?"

Gonzalez went on to discuss her vision for the March 24 "March for Our Lives," an event that will see students across the country converge on Washington to say the nation can no longer wait to tackle issues of school safety and gun control reform.

"I know that the word has spread wide and far but I hope that we can even spread it even farther by that point because I know that that's going to be indescribable, but in such a positive way," she said.