Pelosi says White House is 'crying out for impeachment' 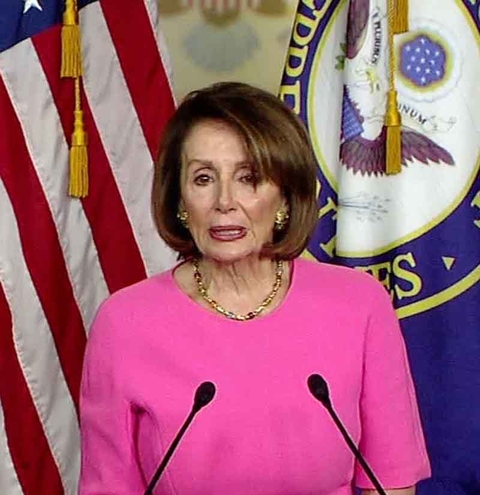 House Speaker Nancy Pelosi argued Thursday the "White House is just crying out for impeachment" but that Democrats will continue to hold back on opening an impeachment inquiry until it's "unavoidable."

"How we deal with it is a decision that our caucus makes, and our caucus is very much saying 'whatever we do, we need to be ready when we do it,'" Pelosi said at her weekly news conference.

Pelosi has previously argued that President Donald Trump is goading Democrats into impeaching him because he thinks it will fire up his base ahead of the 2020 election.

Despite a more fervent push from members in her caucus this week to open an impeachment inquiry, Pelosi continues to argue to Democrats that impeachment is "divisive" and the House is already on a steady course with their investigations.

"It may take us to a place that is unavoidable in terms of impeachment or not," she said. "But we're not at that place."

Related:
Pelosi: Trump "is almost self-impeaching" by demonstrating more obstruction of justice
Key Democrats up the pressure on Pelosi for impeachment

Her comments come a day after Trump abruptly left a White House meeting with Pelosi and other Democratic leaders over infrastructure, blasting her for using the word "cover-up" to describe the White House's lack of cooperation with House investigations.

Pelosi on Thursday described the encounter as a "temper tantrum" from Trump.

"I wish that his family or his administration or his staff would have an intervention for the good of the country." She said.

Pelosi also said the meeting was a "stunt" to distract from the investigations, calling Trump a "master of distraction" from what she believes is truly rattling him: The court cases ruling in favor of House subpoena requests.

"That's something he does well, to distract from problems that he has. He tries to change the subject," she said.

"I think what really got to him is these court cases and the fact that the House Democratic caucus is not on a path to impeachment and that's where he wants us to be," she added.

Pressed on whether she would continue to use inflammatory rhetoric like "cover-up," Pelosi strongly pushed back, arguing it was part of her constitutional responsibilities to conduct oversight. "We can walk and chew gum," she said.