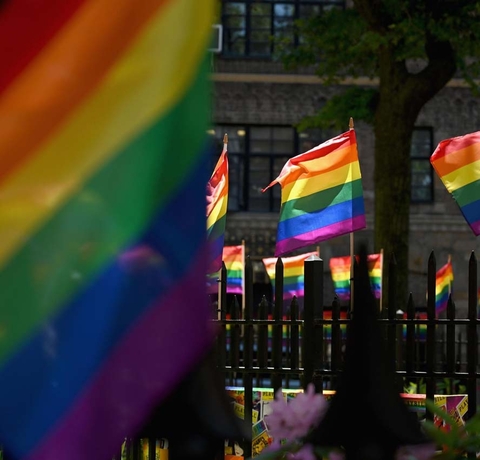 Vice President Mike Pence defended the Trump administration's decision to prohibit American embassies from flying LGBT+ Pride flags on their flagpoles to commemorate LGBTQ+ Pride Month, saying in a new interview that only the American flag should fly in that place.

"I'm aware that the State Department indicated that on the flag pole of our American embassies that one flag should fly, and that's the American flag, and I support that," Pence told NBC News, which was the first to report the story.

Asked whether he thought the decision ran counter to President Donald Trump's earlier celebration of Pride Month on Twitter, Pence said the administration is "proud to be able to serve every American."

"We both feel that way, very passionately, but when it comes to the American flagpole, and American embassies, and capitals around the world, one American flag flies. I think it's the right decision, and we put no restrictions on displaying any other flags or any other displays at our embassies beyond that," the vice president said.

In May, Trump offered his support to one of his 2020 primary rivals, Mayor Pete Buttigieg, who would be the first married gay US president.

In an interview with Fox News, the President was asked to put aside policy disagreements and weigh in on Buttigieg's status as a married gay man.

"Don't you think it's just great to see the fact that you've got a guy there on the stage with his husband and it's normal?" Fox's Steve Hilton asked.

"I think it's absolutely fine, I do," Trump said.

He agreed with Hilton's assessment that Buttigieg's candidacy is a "sign of great progress," adding, "Yeah, I think it's great. I think that's something that perhaps some people will have a problem with, I have no problem with it whatsoever."

But Pence's stances on LGBTQ+ issues have faced criticism from gay rights activists.

Pence signed the Religious Freedom Restoration Act while he was governor of Indiana. Critics of the law contend that individuals and businesses could use it to discriminate against the gay community on the basis of religion.

Pence also signaled support for federal funds to be allocated for gay "conversion therapy" on his 2000 US House campaign website, where it said, "Resources should be directed toward those institutions which provide assistance to those seeking to change their sexual behavior."

Embassies are required to get permission from the State Department when flying anything besides the American flag on their main flagpoles. And while embassies had said the flag displays had previously been routine around Pride Month, multiple US embassies were denied permission by the Trump administration to fly the rainbow pride flag from their flagpoles to commemorate LGBTQ Pride Month this year, two senior State Department officials told CNN Friday.

State Department spokeswoman Morgan Ortagus said Monday that Secretary of State Mike Pompeo's position is "that only the American flag should be flown there, but he of course, as he said in his congressional testimony, respects the dignity of every individual."

Ortagus clarified that the flag can be displayed throughout the embassies as long as it is not on the flagpole on which flies the American flag.