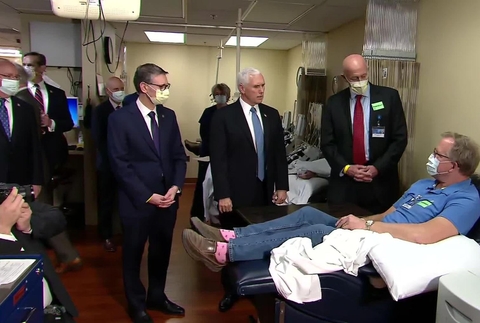 (CNN) -- When Vice President Mike Pence walked into the Mayo Clinic on Tuesday, he wasn't wearing a face mask.

Everyone else in the building was, according to reporters who were traveling with him. After all, it has been the policy at the Rochester, Minnesota, facility since April 13. They even say they'll provide one.

Pence was told of the new rules before he visited, the clinic said on Twitter, a post that was subsequently deleted.

"Mayo Clinic had informed @VP of the masking policy prior to his arrival today," they had written.

But as he visited a blood and plasma donation center inside the building, Pence was bare-faced.

Others in the room -- including Dr. Stephen Hahn, the Food and Drug Administration head -- wore coverings.

Pence did avoid shaking hands; he elbow-bumped instead with doctors and officials.

But he was mask-less as he thanked workers, conferred with hospital administrators and spoke with a Mayo Clinic employee who was donating plasma after being diagnosed with Covid-19 at the end of March.

Pence's office didn't immediately respond to questions about the lack of mask.

In an update its website on April 13, the clinic said it was requiring "all patients and visitors to wear a face covering or mask to help slow the spread of COVID-19."

"Patients and visitors are asked to bring their own face covering or mask to wear. If a patient or visitor does not have a mask, Mayo Clinic will provide one," the website reads.

The guidance is based on recommendations from the Trump administration. The US Centers for Disease Control and Prevention recommended in early April that Americans consider wearing face coverings when in public to help prevent the virus spread from asymptomatic carriers. For roughly the past month, Pence has been getting tested weekly for the virus.

In announcing the new guidance, however, President Donald Trump repeatedly highlighted the recommendations weren't mandatory. And he said he would not partake.

"I don't think I'm going to be doing it," he said, going on to suggest it was hard to envision such a thing in the Oval Office: "Wearing a face mask as I greet presidents, prime ministers, dictators, kings, queens -- I just don't see it."