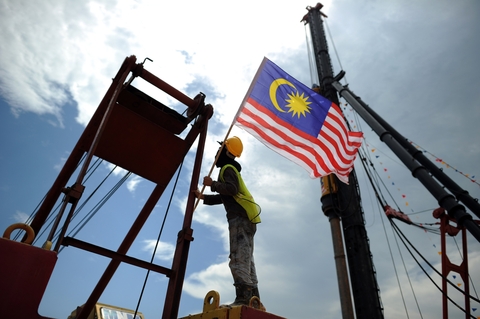 Malaysia is accused of cracking down on LGBT people in the country. Photo provided by Saeed Khan of Getty Images.

Two gay women have been caned in Malaysia amid a worsening climate for LGBT individuals in the Muslim-majority Southeast Asian nation.

The punishment of the two unnamed women took place Monday morning in Terengganu, a state to the east of the capital, Kuala Lumpur, according to rights campaigner Thilaga Sulathireth. The state is governed by Sharia law.

Each woman was lashed six times after being caught attempting to have sex in a parked car. They were also required to pay a fine of 3,300 ringgit ($800).

Sulathireth, who witnessed the caning along with around 100 other people, told CNN that it was a "public caning to all intents and purposes," and that one of the judges had said it was the first time a punishment of this kind had been open to the public.

Monday's punishment shows the religious right "flexing their muscles and making clear that the laws against LGBT activity will be enforced in their state," said Linda Lakhdhir, a legal adviser in the Asia Division of Human Rights Watch. Homosexual sex is illegal throughout Malaysia under colonial era criminal law.

The punishment follows a raid last month on one of Kuala Lumpur's only gay clubs, which saw around 20 men charged for "illicit behavior," and a brutal attack on a trans woman in a city close to the capital.

"It's very uncomfortable, (people are) feeling very oppressed right now. People are afraid because this is the first time that two women are being caned for sexual acts," said Numan Afifi of LGBT activist group the Pelangi Campaign.

The punishment had not previously been used in the state of Terengganu for female homosexuality.

"We don't know what's going to happen in the future. That's the general feeling," said Numan.

The punishment, while handed down by the Sharia court, has the backing of PAS (The Malaysian Islamic Party, or Parti Islam Se-Malaysia), the dominant party in the state.

Despite several attempts, CNN was unable to contact either the Malaysian Ministry of Home Affairs or PAS, the political party in power in Terengganu.

Campaigners said they were concerned about the impact of the punishment on the wider LGBT community. "In the past few years... we had seen an increase in state sponsored anti-LGBT rhetoric," said Thilaga Sulathireh, who works with the LGBT advocacy group Sisters for Justice. "What we're seeing now is not coming out of a vacuum. It's the result of years of anti-LBGT efforts."

In August, the country's Deputy Prime Minister, Wan Azizah Wan Ismail told Malaysian media that members of the LGBT community should not seek to "glamorize" their lifestyle.

"Islam is the official religion (of Malaysia), whereby you have certain practices and it is there in black and white," said Wan Azizah, before conceding that members of the LGBT community "have the right to practice whatever (it is) they do in private."

Activists like Sulathireh point to Wan Azizah's comments as proof of the lack of government protection.

"In this climate there's been an increase sense of fear, people are a bit more careful, one of the things we've heard from the community is increased pressure from their families to be safe. We've been hearing cases of hate crimes and different kinds of aggression. This is part of an ongoing trend," said Sulathireh.

According to Sulathireh, trans women are among the most vulnerable in the LGBT community. Last year Justice for Sisters conducted a small study, interviewing 30 trans women, in which almost half documented cases of hate crimes.

"Being stared at, looked at, being catcalled. Then you have the physical side where people are attacked," said Sulathireh of the 12 hate crimes in the sample pool.

"These are largely (perpetrated) by young people, non-state actors. Sometimes their motives are clear, (but) in many of these cases that we documented, none of the trans women reported the cases to the authorities," said Sulathireh.

The election of Prime Minister Mahathir Mohamad in May this year had initially been welcomed by members of the LGBT community, but concern is now growing.

"We are seeing shrinking spaces in the new administration," Sulathireh told CNN by phone. "Just in the past 100 days we've seen different types of restrictions on LGBT people. It's very concerning."

Anwar, who was jailed for five years in 2015, walked free after being granted a pardon by the country's king in May this year. He has so far failed to speak out strongly in support of LGBT rights.

Rights groups, including Amnesty, have called on Anwar to do more to end discriminatory statements by officials and engage constructively with LGBT organizations.

"It's a long-term project. Attitudes not going to change overnight. The Malaysian government has said that they want to create an inclusive society for Malaysia, one free of discrimination," said Rachel Chhoa-Howard, a researcher at Amnesty International.

"Part of promise of real change includes ensuring human rights are for all people in the country. Changing attitudes takes longer, (and) means ending discriminatory statements by government officials."