Pete Buttigieg has a secret weapon in his run for president 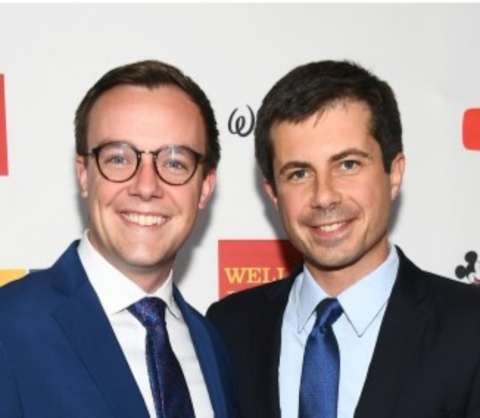 There are now 17 hopefuls vying for the Democratic vote to become President of the United States, but there's only one whose spouse has become a talker.

If Mayor Pete Buttigieg of South Bend, Indiana, is having a moment, so is his husband, 29-year-old Chasten Buttigieg. His sense of humor and revealing honesty about his feelings have been a hit on social media, boosting his followers by the tens of thousands in recent weeks and helping put "Mayor Pete" on the millennial radar.

"The thing I love about him, and maybe the thing you love about him, too, is he is the same person whether we are at home folding laundry together, or if he's in front of a room like this, full of supporters. He's the exact same person," said Buttigieg on Thursday night at a Washington fundraiser for his husband.

Buttigieg's rise in popularity hasn't affected his public voice, which he uses to talk about everything from sartorial challenges -- on Thursday, he pleaded with the cast of Queer Eye via a tweet to help him find a good tuxedo -- to the personal decision gay people make to reveal their sexual orientation.

"Your time in the closet and your journey to coming out belong to you. You are not required to open healed wounds or write lengthy threads in order to explain your worth to others who aren't willing to see it themselves. You matter first," Buttigieg tweeted earlier this week.

A junior high school teacher at a South Bend Montessori school, Buttigieg is now on leave from his day job to be a dutiful political campaign spouse, helping his husband gain name recognition and secure the fundraising dollars he needs to stay in a crowded race.

It can be a grueling role for a political novice such as Buttigieg, with a crammed schedule of meeting hundreds of strangers and spending days and nights in a blur of cities and towns in crucial voting states. Yet, by his social media accounts, it appears Buttigieg is handling the often vulnerable position of having myriad people openly judge, praise and criticize him with good spirits and humor.

Pete Buttigieg told CNN's Van Jones last month that his husband has been good at rolling with the ups and downs of constant travel.

"(Chasten) was really alive to the ways we could use our visibility to help people, to make people feel better just by showing up at their event, things like that, and he's taking that same attitude on the trail. He travels with me about half the time and he definitely got more than he bargained for," he said.

At the Thursday fundraiser, Chasten Buttigieg discussed the couple's first date, four years ago, a few weeks after they met, virtually, on the dating app Hinge.

"I really could tell on our first date when we were walking the streets of South Bend, we went to see a South Bend Cubs game, the way he interacts with people, the way he cares about people, that call to service," Buttigieg said. "He is consistently staying up late and thinking and talking to himself and thinking about 'how can I change the world, how can I make it a better place?'"

The couple married in June of last year; at the wedding reception there were arcade games, the claw-grabber (Pete's favorite) and skeeball (Chasten's favorite).

Should Pete Buttigieg win the election, which is still a long ways off, the couple would, of course, make history: The first married gay president and the first man as first spouse.

Chasten Buttigieg, who this weekend will speak at a Human Rights Campaign gala in Houston, Texas, has not appeared to let his newfound fame go to his head, nor has it changed his Twitter habits. He still operates the Twitter account for the couple's two rescue dogs, Truman and Buddy, in the made-up voice of the dog. And he still muses about everything from Taylor Swift songs to candidate "walk-off" music, what his husband is like at home and which gif best describes his emotional state. Buttigieg's Twitter persona is also what helped him land Mayor Pete, who was a fan.

Jones asked Pete Buttigieg what it was about Chasten that stood out to him when they first were getting to know each other.

"He's got this really quick wit," Buttigieg said. "You can tell if you follow him on Twitter, you'll see what I mean."