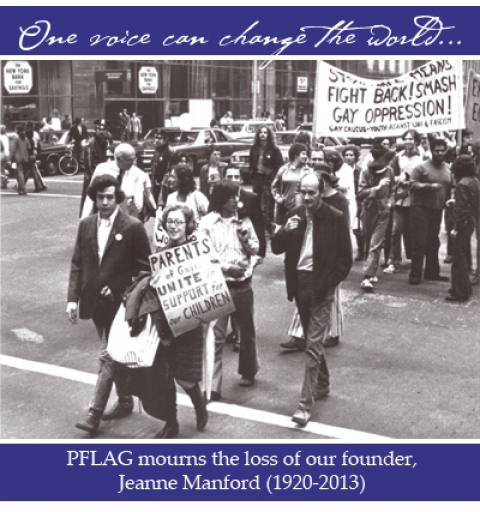 Manford marched alone in a Pride Parade in 1972 to support her gay son. She became an outspoken voice for gay rights and the founder of PFLAG. (photo courtesy of PFLAG national).

DALY CITY, Calif. (AP) — Jeanne Manford, a proud mother whose love for a gay son prompted her to found an international organization for parents and relatives of gay men and lesbians, (PFLAG: Parents and Famiies of Lesbians and Gays) has died at her home in Daly City. She was 92.

Manford became an outspoken gay rights advocate in 1972 after her activist son, Monty, was beaten by police during a demonstration in New York City. She went on to found a local support group there for other parents the next year. In those days, many of the group's members were struggling to accept their children's sexual orientations.

Parents, Families and Friends of Lesbians and Gays, or PFLAG for short, expanded nationwide in 1980 and now has 350 chapters around the world.

Plans for a public memorial are pending.

Today the world has lost a pioneer: Jeanne Manford, the founder of PFLAG (Parents, Families and Friends of Lesbians and Gays) and the Mother of the Straight Ally movement.

Jeanne was one of the fiercest fighters in the battle for acceptance and equality for lesbian, gay, bisexual and transgender (LGBT) people. It is truly humbling to imagine in 1972 - just 40 years ago - a simple schoolteacher started this movement of family and ally support, without benefit of any of the technology that today makes a grassroots movement so easy to organize. No Internet. No cellphones. Just a deep love for her son and a sign reading “Parents of Gays: Unite in Support for Our Children.”

This simple and powerful message of love and acceptance from one person resonated so strongly it was heard by millions of people worldwide and led to the founding of PFLAG, an organization with more than 350 chapters across the U.S. and 200,000 members and supporters, and the creation of similar organizations across the globe.

Jeanne’s work was called “the story of America…of ordinary citizens organizing, agitating, educating for change, of hope stronger than hate, of love more powerful than any insult or injury,” in a speech by President Barack Obama in 2009.

All of us - people who are lesbian, gay, bisexual, transgender, and straight allies alike - owe Jeanne our gratitude. We are all beneficiaries of her courage. Jeanne Manford proved the power of a single person to transform the world. She paved the way for us to speak out for what is right, uniting the unique parent, family, and ally voice with the voice of LGBT people everywhere.