The Pirates of Penzance will take Springfield by storm 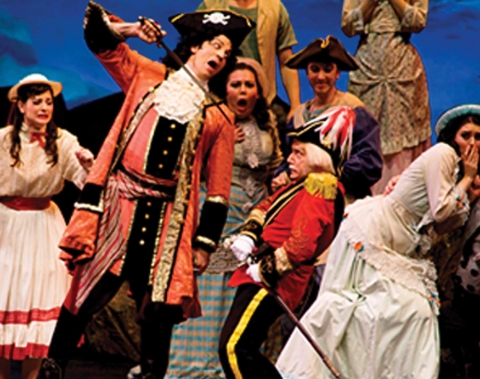 The cast of Pirates of Penzance. Photo provided.

(Springfield, MO) Here’s your chance to get carried away by Pirates! Join the band of swashbuckling buccaneers, bumbling British Bobbies, frolicsome Victorian maidens, and the delightfully dotty “model of a modern Major-General” for a rollicking romp over the rocky coast of Cornwall.

This exuberant musical theatre masterpiece is performed in its original format at Springfield’s Hammons Hall, by the New York Gilbert & Sullivan Players, April 12. The production resonates with classic elegance and power, while the company’s vibrancy, energy and contemporary sense of humor keep the show alive and exciting to a modern audience.

First performed in New York City in 1879, Gilbert’s wit (always incisive but never vicious) and Sullivan’s memorable score are among the most valuable treasures of musical theatre history. Patter songs are a Gilbert & Sullivan trademark, and Pirates features the most famous of them all, “I am the very model of a modern Major-General.”

The show also contains some of Gilbert’s most famous lyrics, such as the often used quotation “a policeman’s lot is not a happy one”…as well as highlights like Mabel’s show-stopping coloratura aria “Poor wand’ring one.”

The plot of Pirates centers on the dilemma of young Frederic who, as a child, was mistakenly apprenticed to the pirates until his twenty-first birthday. Since he was born in a leap year on February 29, he is honor bound to remain a pirate until the distant date of 1940, despite his moral objection to piracy. Helping Frederic to deal with this unusual predicament are the brash Pirate King, Ruth (the pirate maid-of-all-work), romantic Mabel, and the delightfully stuffy Major-General Stanley.

The Pirates Of Penzance – they’ll steal your heart away!