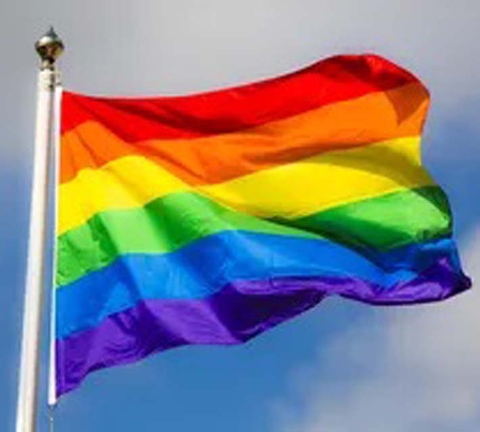 With San Jose Pride this weekend, the city's Police Department became one of the only law enforcement agencies in the country to show its support for lesbian, gay, bisexual and transgender community members by flying a rainbow flag at department headquarters. The flag was raised on Friday, August 23.

Police and public officials raised the flag ahead of Silicon Valley Pride weekend, which will include rallies, live music and a parade in Downtown San Jose on Sunday.

San Jose is about 100 miles from Modesto, California where organizers of "Straight Pride" plan to host their event without a permit.

The symbol of support comes as police, local businesses and elected officials launch efforts to better support victims of discrimination and prevent hate crimes against LGBTQ+ people and other marginalized groups.

Under the new "Safe Place" initiative, which San Jose police announced Thursday, the department has partnered with Starbucks and Wells Fargo locations to make those businesses safe havens for people who have experienced hate crimes. Workers at the 62 Starbucks locations and 25 Wells Fargo branches are trained to call police on behalf of hate crime victims, to allow them to stay inside and to "make them comfortable," Police Chief Eddie Garcia said.

"We know that hate crimes can be an underreported crime," Garcia said. Police hope to address that by making the process easier for victims.

Police in Seattle first launched the initiative in 2015, and it has spread to dozens of cities since then. Member businesses display a rainbow decal reading "Safe Place" in their windows, and while the program has its origins in efforts to prevent crimes against LGBTQ+ individuals, it is meant to address any hate crimes.

"Everyone will know the police department and city will not tolerate these crimes," Garcia said.

"Nobody should go it alone," Chavez said. "Fighting something this insidious, we need to figure out a way not just to stick together but to work together to protect our communities."

To Wiggsy Sivertsen, the South Bay gay rights pioneer who spent nearly a half century at San Jose State University and now serves on a San Jose police advisory board for LGBTQ+ issues, the department's initiatives show how much its culture has changed over the years.

Law enforcement agencies nationwide have typically had fraught histories with the gay communities they serve, marked by hostility and discrimination in decades past. New York Police Department leaders this year formally apologized for the 1969 police raid at the Stonewall Inn, which led to clashes that helped spark the modern LGBTQ+ rights movement.

In San Jose, Sivertsen recalled teaching police officers about gay and lesbian issues as part of training the department implemented after an officer fatally shot a gay, black teenager named Melvin Truss in 1985. As in other parts of the country, local law enforcement in San Jose had insulted or treated LGBTQ+ people poorly.

The officers who took the training weren't openly hostile, Sivertsen said, and every so often one would thank her for leading the class. But, she said,  "It was so clear that they were very upset about having to be in this class."

She added, "They just didn’t think it was worthwhile, and it was clear to me that they were uncomfortable."

On Friday, Sivertsen watched the rainbow flag fly outside a department that now proactively recruits gay and lesbian officers.

"I want to show my rank and file who are part of the LGBTQ community that we're allies," Garcia said. "If they sacrifice for their community and for their other brother and sister officers wearing this uniform, I and this department supports them."

When she looks at San Jose police now, Sivertsen said, she sees a new culture from the chief down that works to welcome and support the LGBT community.

“The symbolism is important," Sivertsen said of the rainbow flag at police headquarters.

“When you see something that reflects you," she added, "it’s a way of saying to people, ‘You’re safe here.' "