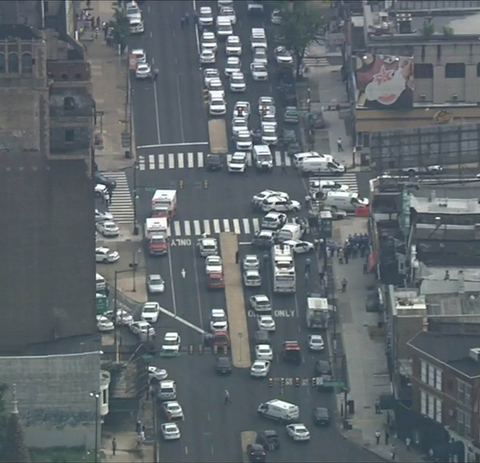 On the scene of the shooting in N. Philadelphia. KYW photo.

Officers are attempting to communicate with a gunman more than three hours after he opened fire Wednesday in North Philadelphia, wounding six officers and trapping two others, police officials said.

Here's what we know:

What's happening with the standoff

Police and other law enforcement agencies responded to a report of an "active shooting" at a house in the North Philadelphia neighborhood of Nicetown-Tiago, Sgt. Eric Gripp, the police spokesman, said on Twitter.

Two police officers were trapped inside the house, Police Commissioner Richard Ross told The Philadelphia Inquirer. The officers were pinned down on the second floor, the newspaper reported, citing police.

More than three hours after the standoff began, officers are still attempting to communicate with the shooter, "imploring him to surrender and avoid further injuries," Gripp said.

Four women who were apparently trapped in the building were escorted out by SWAT officers, CNN affiliate KYW reported. The women were crying.

One of the women told KYW she lived on the second floor. "There were all these cops, they're good people. Don't say nothing bad about them. They kept us safe the whole time," she said.

The shooting began when authorities attempted to serve a warrant on the 3700 block of North 15th Street at about 4:30 p.m. ET, KYW reported, citing police.

Video from a news helicopter showed more than 50 police vehicles at the scene. It also showed police officers kneeling and crouching behind various cars with guns drawn.

The officers, who were not immediately identified, were taken to area hospitals with non-life threatening injuries, he said.

Where the standoff is taking place

Authorities have repeatedly urged residents to stay away from the Nicetown-Tiago neighborhood because shots were still being fired.

"Suspect is still firing. STAY OUT OF THE AREA," Gripp said.

A day care center and a learning center near the house were evacuated, police said.

Parents whose children were at the Shake, Rattle & Roll Learning Center and the Precious Babies day care were asked to go to a 3643 Germantown Avenue, where they will be reunified, Gripp said.

Nearby streets were being evacuated, police said.

"Seek shelter. Secure doors. Be silent. Be still. Police are responding," the university said on Twitter. More than an hour later, the university continued to advise students to "stay indoors away form windows."

What people are saying

President Donald Trump has been briefed on the shooting and is monitoring the situation, according to the White House.

The Philadelphia Phillies tweeted a message of support to the police department.

"Our thoughts are with the members of @PhillyPolice injured today and everyone working to resolve the situation currently happening in North Philadelphia," the baseball team said in a tweet.

This is a developing story, and our fourth update.