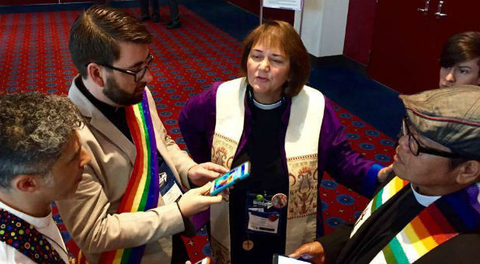 LGBT pastors gather at the conference. Photo by Charisma News.

Liberals in the United Methodist Church are facing difficulty after the conference made a decision to strengthen anti-LGBT language.

It also ruled that homosexuality is “incompatible with Christian teaching.”

Now, progressive Methodists are figuring out what they can do to inclusive.

Some Methodist churches have even made a direct effort to be inclusive to LGBT people, and many LGBT clergy members are currently serving in churches.

According to the New York Times, those church communities will learn within the next month if they can keep their property and assets and if their LGBT colleagues will lose their jobs.

Some pastors and lay people are debating starting a new denomination, while others are set on staying with the Methodist church.

At Mosaic United Methodist Church in Oklahoma City, pastors released a statement Friday stating they don’t know what will happen with the denomination, but Mosaic will continue to accept people across the gender and sexuality spectrum.

“To my lesbian, gay, bisexual, transgender, queer, questioning, intersex, asexual, and gender non-conforming family, we see you,” the statement reads. “We hear you, we love you, you a beloved child of God."

Other affirming churches are releasing similar statements across the nation.