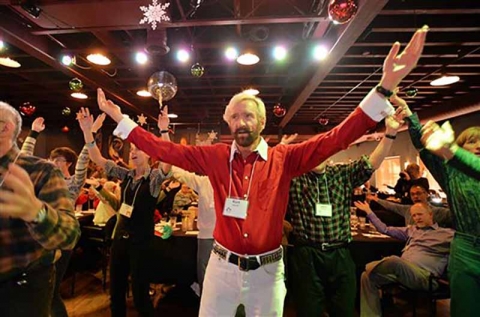 BOULDER, Colo. (AP) — For some, the only thing more difficult than coming out is going back into the closet, spending the final chapter of their lives in hiding.

But that story is not rare for seniors who are LGBT  (lesbian, gay, bisexual or transgender).

It's one thing to come out and have the freedom to return to the privacy of your own home, but it's a whole different situation to come out in a community of relative strangers whom you can't escape and you must spend every meal with, Teresa DeAnni, of Boulder, says in a film on the topic.

"You are fearful you will be laughed at or talked about, so you go back into the closet. So you don't talk about yourself or your life," she says. "It's kind of like a living death sentence."

DeAnni is the founder of Project Visibility, a program offered by Boulder County Aging Services to train caregivers and the community about LGBT elders.

The name, Project Visibility, refers to this often invisible and overlooked population.

Some never come out. Others stay guarded and hushed.

The project has trained more than 1,000 people across Boulder County since 2003, and it just launched a new, free online course open to the public. The course, believed to be the first of its kind in the country, teaches about the unique issues that so-called "rainbow elders" might face after growing up in a time when social and career discrimination about sexual orientation was rampant.

Then there are legal and logistical issues that come up with health care and end-of-life matters.

The course offers tips on how to create a non-judgmental, welcoming environment for people of all backgrounds in retirement homes and assisted living facilities, with the hopes of providing meaningful connections and comprehensive care for LGBT elders.

About 90 percent of rainbow elders don't have children to help care for them, and many are estranged from their families, further underscoring the importance of professional caregivers, according to Project Visibility.

They are twice as likely to live alone, often have fewer financial resources and are five times less likely to seek services, the project says.

The course kicked off this fall in Boulder County, with plans to expand statewide in 2016 and across the nation thereafter.

Judith Blair, a curriculum designer for web-based educational programs, worked with the county to design the course, using funding from a $100,000 grant. The goal: to reach the most people, especially those on the front lines of care, with the hopes of spurring systematic change, she says.

"Those people who give 20 showers a day and are working for $9 an hour, they aren't going to be sent to a half-day workshop. They don't get that kind of professional development," Blair says. "But if we could offer an educational program that was free to everyone, in 30 minutes, they could open their minds and hearts to the fact that there are LGBT people where they work, and they've been through a very hard time."

Blair, herself, identifies as a rainbow elder.

When her partner of 18 years died earlier this year, Blair says, she was denied survivor benefits typically granted for common-law marriages.

"Especially if your health or mobility is compromised, it's tough to get out and fight every day," she says. "People give up the fight because they get tired or sick or injured. They don't have as many financial resources. It's pretty daunting. We want to think we live in a civil society, but there's still a lot of work to be done."

Despite recent changes, many LBGT elders remain fearful because of their historical context, Blair says.

"The '50s and '60s, you could easily expect to be arrested if you went to a gay bar. You lost jobs. I wanted to be a teacher, but I was told, 'You will never be able to come out if you're a teacher,'" Blair says.

When her lesbian friends met for Sunday brunch, they made sure to close all blinds in the house, she says. And gaymen were often targeted brutally, she says.

"Today, they see things are better and they're glad, but the instant reflex they go through is to be quiet and suffer and not to be themselves," Blair says.

Boulder County is a nationwide leader in advocacy for gay elders. Of the 650 Area Agencies on Aging across the country, Boulder County's is the only one with a designated LGBT staffer — and the organization has had one for about a decade, says Nancy Grimes, one of the two LGBT program specialists for the Boulder County Area Agency on Aging.

"It's really needed at this point in time, because our particular group of elders were in the closet their whole lives," Grimes said. "They did not trust institutions. They didn't come out in their jobs and are unlikely to want anything to do with the government that told them they were a security risk and couldn't be in the military, or the faith communities that rejected them. They have been very stigmatized and very much discriminated against."

Statistically, one in 10 people in elder care are likely LGBT — even though when surveyed, many facilities report they don't know of any, the project says.

There are 3,500 LGBT people 60 and older in Boulder County alone, the project reports. About 500 receive the Project Visibility newsletter, and more than 100 came out for the recent Lavender Gala, an annual party for LGBT elders.

Estimates indicate there are more than 3 million LGBT elders in America. By 2030, that number is expected to top 7 million.

More than half say they don't disclose their sexual orientation to medical professionals, the project says. Then doctors don't have the whole story or inadvertently ask hetero-biased questions, which can further the disconnect, Grimes says.

Instead, she urges medical and care professionals to make no assumptions and ask open-ended questions. Instead of asking if someone was married or had children, ask who was important in their lives, she says.

"When you have to live with a pseudonym about what your life is like, not talking about your weekends, no pictures of your spouse, you are almost a ghost," Grimes says. "And that's a big psychological difference for men and women who are gay — much less the trans community. They live these shadow lives."

Even just LBGT-inclusive small talk — a simple reference to Ellen DeGeneres, for example — can open communication and reduce isolation, she says.

"Caregivers talk about how you can feel a piece of them missing," Grimes says. "We want people to live with 100 percent of their souls, until they die."