Public health officials resigning amid threats during the Covid-19 pandemic 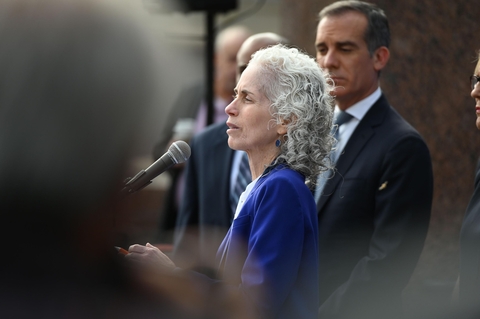 Los Angeles County Public Health Director Barbara Ferrer said she has been getting threats since March. Photo by Robyn Beck/AFP/Getty Images via CNN.

During a live public briefing on Facebook last month, "someone very casually suggested" the Los Angeles County's public health director should be shot, the director said.

"I didn't immediately see the message, but my husband did, my children did, and so did my colleagues," Dr. Barbara Ferrer said Monday in a statement.

It's just one of the many threats of violence public health workers are facing across the nation "on a regular basis" as the Covid-19 pandemic rages on, Ferrer said.

Whether it's advising people to avoid large groups or encouraging people to wear face coverings in public, health officials -- both at the local and federal level -- have spent the last few months updating Americans on how to remain safe during the pandemic and avoid spreading the virus.

There are more than 2.3 million reported Covid-19 cases throughout the United States, according to Johns Hopkins University data. There have been at least 120,402 virus-related deaths.

Yet across the US, many people have taken issue with guidance from health officials -- as the act of wearing a mask to protect others during a pandemic has become a political and cultural flashpoint.

The backlash has taken its toll: At least 24 public health officials have either resigned, retired or been fired from the positions during the Covid-19 pandemic, the National Association of City and County Health Officials (NACCHO) said Monday.

"What has typically been just pure public health advice coming from a trusted source in the community, the local health department, is being politicized and made to seem like the public health advice is something that is restricting people's rights, their freedoms to move about," Lori Freeman, CEO of NACCHO, told CNN.

NACCHO said last week that threats toward public officials are happening "across the country, in red states and blue states, large metropolitan areas and rural communities."

As a result, many have obtained personal security as protection.

Dr. Anthony Fauci, the most public medical face of the federal response to the coronavirus pandemic, has had personal security from law enforcement, including at his home, for a few months now after receiving threats.

In Georgia, Kathleen Toomey, the commissioner of the state's department of public health, confirmed to 11Alive last month that she had received several threats. Toomey now has personal security, 11Alive reported.

Amy Acton, the director of the Ohio Department of Health, resigned recently in the wake of criticism of the state's coronavirus restrictions. Protesters had turned up at her home several times, CNN affiliate WSYX reported, and one state lawmaker called her a "dictator."

In California, Ferrer isn't the only one who has experienced threats. "Several other health officers and health directors have received threats," said Kat DeBurgh, executive director of Health Officers Association of California.

Since March, the team at LA County Health has been attacked via email, public postings and letters. At least one health official has a sheriff escort in the community because of threats, DeBurgh told CNN in an email.

The Los Angeles County Sheriff's Department said the threats referenced by Ferrer are being investigated.

Chris Farnitano, the Contra Costa County health officer, has had protests outside his home that were broadcast live on Facebook, DeBurgh said.

"The experts who comprise our public health departments are true heroes," NACCHO said. "We should be thanking them for their tireless work and heeding their advice, not threatening their safety and careers."

Health officials are not only facing threats, but also severe burnout, according to DeBurgh. In California alone, eight local officials and two state health officials have resigned since the start of the pandemic, she said.

"Some were scheduled retirements, but this rate of attrition is alarming, and is at least in part caused by burnout," DeBurgh said. Some are working 80 hours a week while facing "political pressure and personal attacks," she said.

And while it's only a "vocal minority engaging in these tactics," the level of response is unprecedented, DeBurgh said.

"We recognize some of the names and tactics of the opponents of vaccine laws in the past," DeBurgh said, "but we've never seen a reaction like this."

Why many health officials are leaving their roles

Most health officials departing their roles are leaving because of pushback from people who don't like public health restrictions needed to control the pandemic, Freeman, CEO of NACCHO, said.

"We've been tracking over 20 resignations, firings and unusual retirements that really would never happen in the course of a pandemic with a normal health official, typically because they're so needed in the community," Freeman said.

She said the organization is seeing more positions being vacated in past weeks.

These incidents have been happening across the country and can cause problems in an already understaffed sector fighting a pandemic.

Freeman said officials find themselves having to enforce the guidelines around reopening states and giving out the best public health advice and guidance that they have, including about social distancing, wearing masks and hand hygiene. Some people don't like it.

"It's sort of this false narrative, this false dichotomy between being able to safely open and go about your business, but also be healthy and safe while you're doing it."

These losses don't help at a time when public health departments are already understaffed.

"We came into this pandemic at a deficit, our local health departments across the country have lost 25% of their workforce over the past decade," said Freeman.

"It just increases an imbalance in the leadership of the health department in a time when we really need our health departments to be front and center on this, on the front lines in fighting this pandemic."

In a press briefing on Monday, Ferrer said it's been "extraordinarily hard to work under conditions where people are so angry with you, take it so personally that they do threaten your well being and threaten the well being of people around you."

"We would love for the discourse to shift," she said, "and for us to really spend our time talking about how together we mark our way through a recovery journey, and we all work together to save lives."