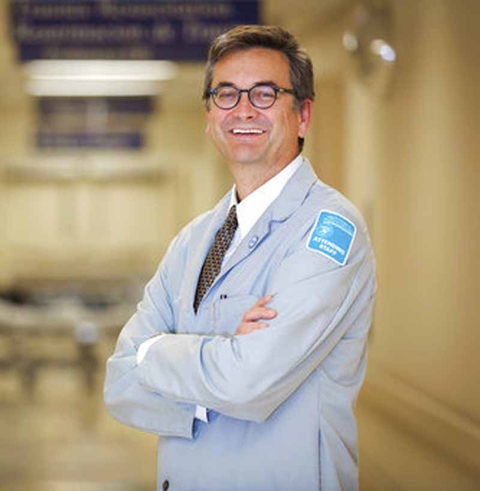 Cook County Health & Hospitals System, which handles more than 1 million patient visits in the Chicago area every year, has seen a significant financial boost from the Affordable Care Act.

The federal law — whose future is up in the air — expanded the Medicaid program for the poor, giving most of the system's patients coverage for the first time in its 180-year history. As one of the nation's largest public health systems, it runs more than a dozen community health centers and two hospitals, including one on which the TV drama "ER" was loosely based.

About 70 percent of the system's patients were uninsured before the Affordable Care Act expanded coverage in 2014. Now, nearly the same percentage has coverage, and the system relies less on local tax dollars for support. The law's future is unclear as Republicans in Congress consider another push to replace it after failing last month.

Hospital system CEO Dr. Jay Shannon, who has followed the debate closely, spoke recently with The Associated Press. Questions and answers have been edited for clarity and length.

Q: What are the biggest ways the ACA has affected your hospitals and clinics?

A: Most important is the impact for the patient. (They) now have access to care coordination, they have access to community mental health and substance use services if they need it, and ... we can give them preventive services including things like vaccinations.

Q: How has the influx of patients covered by Medicaid affected your bottom line?

A: The health system has been able to break even for the first time in our history. We always operated at a gigantic loss. It has been an increase in revenue to the system of somewhere between $200 million and $300 million a year for the past three years.

A: Actually, our volumes, our registrations, have not gone down.

Q: Has the nature of those visits changed?

A: We're seeing a decrease in what some health care researchers refer to as ambulatory sensitive conditions. That is, those things that ought to ... have been cared for if your primary care home was open and you could reach them. A sore throat, I've got a fever, I've got symptoms of a bladder infection, those kinds of things.

Q: You run a safety net hospital that treats people with little or no income, and you have clinics around the city. What is your top public health concern?

A: Repeal of the Affordable Care Act, absolutely, because that has been such a leg up for so many adults who previously weren't able to get insurance. For us, the growth in the proportion of people who have insurance post-ACA is almost exclusively because of growth in Medicaid expansion in Illinois and in Cook County, so that is the biggest concern that we have.

Q: Insurers have been pushing patients for years to seek care at less expensive locations outside hospitals. How is your business evolving to address that?

A: We actually embrace that. We have passed a strategic plan that marks an intentional pivot to moving ... to community-based ambulatory services. That's comprehensive services ideally, including primary care, specialty care, behavioral health, dental services. We want to make it ambulatory care if at all possible and reserve the expensive, higher-risk, (hospital) setting only for those people who absolutely need it.