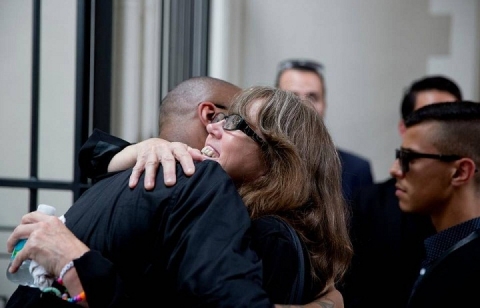 At the Democratic National Convention today, a mother of a Pulse shooting victim spoke.

Christine Leinonen, mother of Pulse shooting victim, Christopher, opened with, “Last month, my son Christopher, his boyfriend Juan, and 47 others were murdered at a club in Orlando.”

She said that Christopher won an Ann Frank Humanitarian award for forming a Gay Straight Alliance in high school.

Leinonen said that her son’s paternal parents met in a Japanese internment camp so “it was in his DNA that love always trumps hate.”

She continued, “Christopher was a big Hillary supporter. That’s why I’m here, so that I can tell  you about the day he was born.

“At the time, I was a Michigan state trooper. When I went to labor, the hospital put my off duty gun in a safe. I didn’t argue. I know common sense gun policies save lives.”

"I never want you to ask that question about your child. That’s why I support Hillary Clinton.”

Her speech was the first time the entire crowd was silent. Once she had finished, people of the crowd wiped away their tears, stood, and cheered.