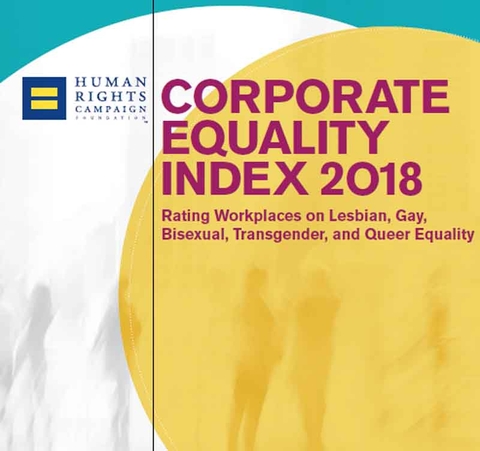 Businesses large and small have long lead the country in protecting their LGBT+ employees against on the job discrimination. It was business leaders that first recognized LGBT+ relationships by granting domestic partner benefits to same-sex couples who could not legally get married. The benefits importantly included the ability to be covered by company provided health insurance and providing for the same retirement benefits that are available to opposite sex couples.

Companies became affirming of their LGBT+ employees, not because the law required it, but because business leaders recognized that it was the right thing to do, made them more competitive and provided for happier employees.

It reported that 609 businesses met every criteria and earned a 100 percent rating, and the designation as “Best Place to Work for LGBTQ Equality”. The first index had 13 top rated companies.

● Equitable benefits for LGBTQ workers and their families; 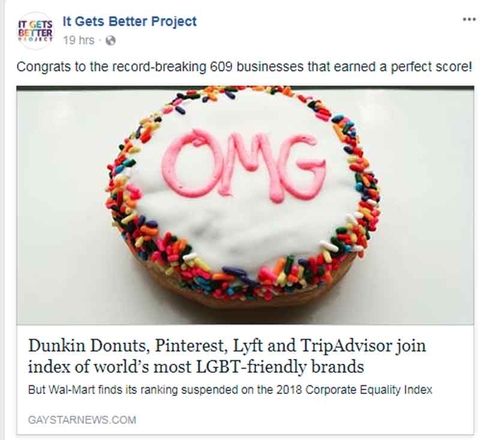 Sixty-five companies were in the CEI this year for the first time. They included Dunkin’ Brands (owners of Dunkin’ Donuts and Baskin Robbins), GODADDY, Lowe’s Companies, Lyft, Nokia, Pinterest, TripAdvisor and Warby Parker.

For past coverage of the HRC CEI, visit:
Where do you shop?
HRC Corporate Equality Index 2016 rates global LGBT workplace inclusion.

“This year, the LGBTQ community has faced all-out assaults on our most fundamental civil rights from the highest levels of government,” Chad Griffin, President of HRC said in a forward to the report.

“Basic decency and fairness have been flung out the window, and some of our bedrock American principles are being tested. That is why it is especially remarkable that this year has ushered in a new high watermark in lesbian, gay, bisexual, transgender and queer (LGBTQ) workplace inclusion.

“In our 16th edition of the Corporate Equality Index (CEI), a record-breaking 609 employers have earned perfect 100 percent scores. From tech startups to construction companies to auto manufacturers, major businesses — employing millions of Americans — are stepping up to ensure their workplaces are fully LGBTQ inclusive. On a practical level, this means that millions of LGBTQ workers across America — as well as LGBTQ workers employed by multinational companies around the globe — are covered under non-discrimination policies and able to bring their full selves to work every day.”

Notably missing from the Top 20 was Wal-Mart Stores, the nation’s largest company, which scored 100 last year for the first time.

“In explanation of the company’s suspension, HRC states: ‘During the CEI survey cycle, two Equal Employment Opportunity Commission determinations were made public in the cases of Jessica Robison and Charlene Bost. These determinations pointed to significant enforcement gaps in Wal-Mart’s non-discrimination policy, specifically with regards to sex and gender identity. Pending remedial steps by the company, the CEI rating is suspended,’ according to a GayStarNews.com report.

“Robison, a transgender employer with a Wal-Mart subsidiary Sam’s Club, complained to the EEOC that she had been denied access to transgender healthcare. The EEOC came down in her favor.

“EEOC also determined in favor of Bost, also transgender and a former employee with Sam’s Club, who lodged a complaint against Wal-Mart for harassment and unfair dismissal after coming out as trans.

“Approached for comment, a Wal-Mart spokesperson sent the following comment: ‘We are proud of our work on LGBTQ-inclusive and nondiscriminatory policies. We’re disappointed with the HRC’s decision to temporarily suspend our score, which was going to be rated at 100 percent for the second year in a row.

“‘While we respect the HRC’s work, we are confident in Walmart’s leading practices that support our LGBTQ communities and look forward to further educating them on our policies.’