Resources available for LGBTQ people seeking asylum in the U.S. 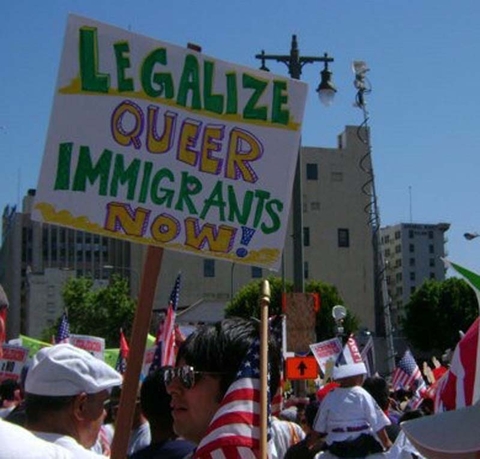 Did you know it is still illegal to be gay in 70 countries? Every year, for this reason, and many more, thousands of persecuted LGBTQ people seek asylum in the U.S.

“However, upon arrival in their new home, many do not know which direct service providers are legitimate and LGBTQ-affirming, fearing even ‘help’ will discriminate,” said Katie Sgarro, president of AsylumConnect. “In addition to facing challenges as asylum seekers, LGBTQ asylum seekers also face unique obstacles due to their LGBTQ identities, such as prejudice from fellow asylum seekers, immigration judges and translators.”

She said, for this reason, LGBTQ asylum seekers often struggle to access legitimate services which are both accessible to asylum seekers and LGBTQ-affirming.

Sgarro said she co-founded the non-profit, AsylumConnect, because of her connection to the LGBTQ community.

“AsylumConnect is a tech nonprofit providing the first-ever online connector for LGBTQ asylum seekers and the organizations who serve them,” Sgarro said. “From leaving their dangerous home country to resettling in their new home, it is often a matter of life-or-death for LGBTQ asylum seekers to be able to easily identify and connect with legitimate and LGBTQ-affirming lawyers and other direct service providers.”

Launched in 2016, the “AsylumConnect catalog” is the first and only resource website and app designed for LGBTQ asylum. LGBTQ asylum seekers use AsylumConnect as a free digital one-stop-shop referral site to meet their needs in all aspects of their lives, including where it is safe to go for help with housing, legal, medical, mental health, translation, education and employment.

Lawyers and other direct service providers also use the free app to gather verified service referrals for clients. The app can currently connect users with verified LGBTQ and immigrant-friendly services in 23 U.S. states, Canada and now Mexico in response to recent U.S. asylum policy.

Sgarro I co-founded AsylumConnect with a classmate in college who is a former LGBTQ asylum seeker himself.

“LGBTQ people seek asylum in the U.S. due to persecution in their home countries based on their sexual orientation and-or gender identity,” explained Sgarro. “There are still 70 countries, mostly in the Middle East, Africa, and Asia, where homosexual activity between consenting adults is illegal.

“Even in countries where homosexuality has been decriminalized, LGBTQ people can still face violence, arbitrary arrest, imprisonment and torture. These realities cause thousands of persecuted LGBTQ people to seek asylum every year.”

She said the biggest challenge asylum seekers to the U.S. face right now is a hostile administration.

LGBTQ people in detention are 97 times more likely to be sexually assaulted than non-LGBTQ people.

There is a brief description on their website under "How Are Resources Verified” outlining how they define these questions.

There is now a "third country" rule which bars asylum applications from individuals at the southern border who passed through a third country on their way to the U.S. but did not seek asylum in that country.

“This rule effectively limits asylum protections to Mexican nationals and nationals of other countries who cross the United States’ border by direct air or sea travel,” said Sgarro. “Civil rights groups have already filed two lawsuits challenging these new asylum restrictions. On July 24th, a federal judge issued a preliminary injunction blocking asylum restrictions at the southern border. The judge’s preliminary injunction halts the policy while the lawsuit plays out in court.”

Many people could benefit from AsylumConnect.