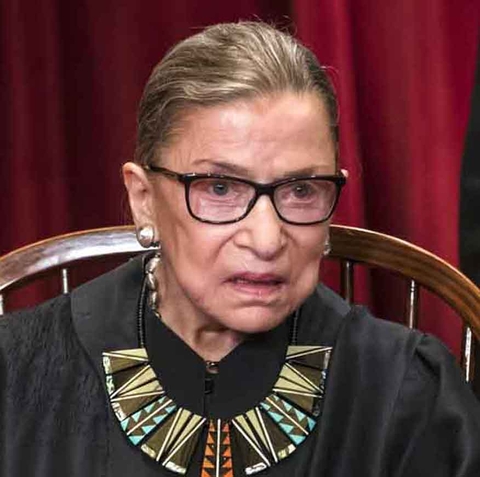 Justice Ruth Bader Ginsburg, making her first public appearance since it was announced that she had undergone recent treatment for pancreatic cancer, appeared strong Monday when she accepted an honorary degree from the University at Buffalo.

RELATED: Ginsburg suggests she has at least five more years on the Supreme Court

The 86-year-old liberal icon stood as she made remarks and briefly referenced her health, which has again been the focus of public speculation given her status as the court's senior-most liberal and the potential for President Donald Trump to dramatically shift the court to the right were she to retire.

"In July 2018, Wayne (Wisbaum) wrote to me that his health disabled him from playing a lead role in the arrangements for my visit here but he still hoped to attend all the events. He asked me to confirm that I would come to Buffalo in August 2019 in any event. I did so immediately and I did not withdraw when my own health problems presented challenges," Ginsburg said, referring to a Buffalo attorney she knew in college at Cornell who invited her to Monday's event but who passed away.

She also told students in attendance that it was "beyond my wildest imagination that I would one day become the Notorious RBG.

"I am now 86 years old, yet people of all ages want to take their picture with me. Amazing," Ginsburg said to laughter and applause. She later sat down for a question-and-answer session.

Ginsburg, the senior liberal on an ideologically split Supreme Court, has made several public speeches since the nine justices began their summer recess in late June. Later Monday evening, she is scheduled to make remarks before an audience of more than 2,000 people at the Kleinhans Music Hall in Buffalo.

But her Monday appearance comes just three days after the Supreme Court's announcement that physicians had discovered a malignancy on Ginsburg's pancreas and that she subsequently had three weeks of radiation treatment.

Friday's announcement from the Supreme Court's public information office said the pancreatic "tumor was treated definitively and there is no evidence of disease elsewhere in the body." The tumor was first detected after a blood test in July.

Ginsburg's health has been a recurring subject of public interest because the high court, with its membership becoming increasingly conservative, is poised to transform the law in America. Conservatives hold the majority 5-4, but the left has worked to minimize the rollback of liberal precedents from earlier decades, including to preserve abortion rights.

Since coming to office, Trump has made two appointments, Neil Gorsuch in 2017 and Brett Kavanaugh in 2018, deepening the conservative bloc.

Still, those nominees succeeded justices who generally aligned conservative. If the health of liberal bulwark Ginsburg would lead her to retire during Trump's presidency and he were able to make a third lifetime appointment, he could truly transform the country's highest court. It would be a 6-3 bench, able to shift the law in America dramatically to the right.

Appointed in 1993 by President Bill Clinton, Ginsburg in 1999 underwent surgery for colorectal cancer. She was treated in 2009 for early stages of pancreatic cancer. Last December, Ginsburg had surgery to remove two cancerous nodules from her left lung.

Ginsburg, who first obtained national prominence as a women's rights lawyer arguing before the Supreme Court, has become something of a judicial rock star, speaking to standing-room-only crowds on campuses across the country.

Her writings, beginning with an impassioned dissent on behalf of the four liberals in the 2013 Shelby County v. Holder case that scaled back the reach of the Voting Rights Act, have inspired the "Notorious RBG" meme on social media. She has been the subject of books, a feature film and a CNN documentary.